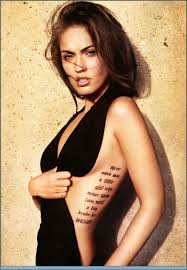 So I've wondered what I'm going to publish in Small Wars Journal next. I figure that Boss Mongo gave me some good inspiration in suggesting that I write something about the "compound war" waged by T.E. Lawrence's guerrilla operation in Arabia in conjunction with General Edmund Allenby's proto-blitzkrieg war waged in what is now Jordan, Israel and Syria. The combination of conventional war, unconventional war and a host of other factors leads to that incredibly popular term, "hybrid war". (I swear, this term is more popular than Megan Fox. Speaking of which, time to add a picture...)
Posted 01:34