If what you're doing doesn't work, don't keep doing it. 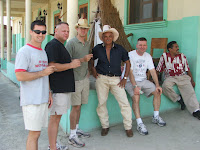 It's hard to believe it's close to 50 years since Castro seized power in Cuba. In the late 1950s and early 1960s, Cuba was a threat to American and Western security on par with threats to Berlin. Even more so, when you consider that Cuba lay some ninety miles from the Florida coast, and, in 1962, was the home to dozens of Soviet nuclear missiles, to include tactical nuclear missiles which moved to within a few miles of the US base at Guantanamo Bay during the Cuban Missile Crisis of 1962.

After those fateful 13 days in October, Cuba slipped off the US foreign policy radar for the most part, after being slapped with a trade embargo designed to punish Fidel Castro and weaken his regime, but in reality, served to punish the Cuban people, and created a boogey man for Castro to fire angry rhetoric towards. Oh yeah, it also punished me, since I can't get Cuban cigars without going to Canada or Latin America and sneaking them across the border because I'm a patriotic citizen who respects our Cuba policy, therefore I don't purchase Cuban cigars.

Worse yet, the only aid being pumped into that country comes from players like Hugo Chavez. Yes, Hugo Chavez is best buddies with one of our close neighbors.

Today, it looks as if we're moving towards the easing of the embargo against Cuba. Which I think is a step in the right direction. For example, China, while still nominally a communist nation, becomes markedly less and less so as it increases contact with Western countries and enters the international market. Why can't the same be the case with Cuba?

Focus: When did everyone become so holier-than-thou about smoking Cuban cigars? I miss the days of living on the little Honduran base in Soto Cano, where we had a Cuban cigar store, went on a cigar factory tour, and had regular Cuban cigar smoke-offs.

Focus 2: I've long held that the most patriotic thing one can do to stop Communism in Cuba is to buy Cuban cigars. Who's with me?

I agree that it's time to give up our no access to Cuba policy. Technically U.S. citizens can travel there legally - just not spend money. U.S. gov't logic at its best.
What the embargo is is a 47 year long personal vendetta against Fidel Castro on the part of our gov't. As far as communist nations go, China has much greater humans rights violations than little Cuba and yet the U.S. gov't falls all over itself to maintain cozy relations with Beijing.