Is it better to fear or love reflector belts? 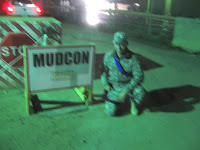 My last post elicited the following reply from our favorite blogger from south of the Rio Grande, Greg in Mexico, who blogs about working among the poverty and violence in Mexico. Greg writes:

You seem most bothered by the reflector belt. You should post a pic of one and tell us why the heck these are so important (I can assume but i'd rather hear your take).

Where to begin? Ah yes. There was a great book written in the 1970s by Norman Dixon which discusses the nuances of military leadership which are well and good in peacetime, but are ridiculous in wartime. Dixon covers a few peacetime nuances such as resistance to change and the tendancy to assume that future war will look like past wars. But there's another aspect of military life in peacetime which inexplicably winds up in wartime. Indeed, during the First World War, T.E. Lawrence decried the sort of parade-ground proficiency that was so prevalent during the peacetime Army, but so utterly useless in combat (look at his Arabs). Dixon searches for a word to describe this preoccupation with the drivel of the parade ground and barracks square, finally conceding to the scientific term, "bullshit". (Indeed, an entire chapter is dedicated to “bullshit”)

“Bullshit” has taken many forms over the centuries. In the Civil War, it might take the form of impeccably shined belt buckles and buttons. In the early 20th Century, the entire Russian fleet was sent to the bottom of the Straits of Tsushima—bu at least they ghosts of the Russian sailors can rest easy knowing that their wrecked battleships sank with immaculately swabbed decks.

During the Second World War, cartoonist Bill Maudlin created a cartoon about the adventures of two infantrymen named "Willie and Joe". Willie and Joe represented the vast majority of drafted infantrymen during the war. Notable about Willie and Joe was the fact that they were always drawn with wrinkled uniforms and shaggy beards. (Until one of the final cartoons, where they, like Donny, got out of the Army and had to look presentable for job interviews). The shabby appearance of these two cartoon characters enraged General George S. Patton, who practically demanded Bill Maudlin's head on a platter. Only the ever-diplomatic General Dwight D. Eisenhower was able to talk some sense into him.

The Greatest Generation had beards, Generation Y has the reflector belt.

Presumably during the 80s and 90s, the Army decided that, since Soldiers do physical exercise largely before dawn, it might be a good idea to issue out yellow reflector belts to Soldiers so that cars wouldn’t hit them. As ridiculous as it sounds, it actually works well.

But in 2001, the Army issued out a new physical training uniform which actually incorporated reflective properties into it. Furthermore, most bases had shut down many of the major roads for so that Soldiers could run without having to worry about cars hitting them. At this point, the reflector belt became rather superfluous, but amazingly, it was decided on many bases that no matter the time of day, and no matter whether you’re running along a road or whatnot, the reflector belt was mandatory. Indeed, a really good idea became corrupted.

The trend carried forward to Iraq, where Soldiers might be in danger of being hit by large trucks. Soldiers have orders to carry the reflector belt with them 24 hours a day, and to wear them sunset to sunrise. This is fine and dandy on large Forward Operating Bases where you’re miles away from enemy contact, but potentially lethal on smaller combat outposts which might be in the middle of the city.

Reflector belts may be yellow, orange, red, blue, or even pink. Some units have mandatory colors, others leave the decision to the Soldier as to what color to wear. Many female Soldiers like to wear pink reflector belts, and many males like to wear them as well to protest how incredibly effeminate the reflector belt policy can be at times.

But the reflector belt is only worn on the FOB, never “outside the wire”, right? WRONG! One day, I had an early morning flight, and walked to the aircraft while it was still dark, pre-flighting with a flashlight in hand, and a reflector belt across my torso. After a few hours of flight, we shut down at another FOB to eat lunch, and, upon taking off my body armour and flight vest, I discovered that I was still wearing my reflector belt. Son of a bitch.

As requested, here’s a picture of me with a blue reflector belt at an Air Force base, where I’m also posing next to yet another inane point of safety. See, we have various Threat Conditions (THREATCONs), and Alert Conditions (LERTCONS) in the military, but this was the first time I’d ever seen the Air Force warn people of the imminent Mud Condition, or MUDCON. This is especially critical, as no one in the Air Force apparently wants to get their vehicle muddy and have to subsequently wash it.

So in sum, the reflector belt has great safety properties, but like many safety aspects, it’s been taken to extremes. As one poster on Small Wars Journal is keen to point out, “This truly is the bike helmet generation”.

Hey Starbuck...I've been "in country" and therefore offline for a week so I haven't been able to respond. Thanks for the skinny on reflector belts. The closing quote, "This truly is the bike helmet generation" captures it in a nutshell.

Mexicans, for example, tend to have a very different take on personal safety and so therefore don't rely on the silly "safety nets & devices" of which we gringos are so obsessed.

The example of Gen. Stonewall Jackson (for whom my 3rd son is named, BTW) is indeed prescient. If the good general had been wearing a standard issue safety belt then perhaps the most costly incident ever of friendly fire could've been prevented. But, on the other hand, I cannot imagine that a Confederate general would ever demean himself by wearing something so incredible gay as a safety reflector belt. O how the times have changed! :-D