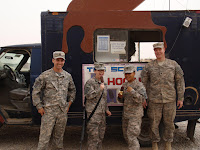 With that said, I'm still absolutely astonished that we were able to get our hands on an ice cream truck--complete with the motto, "Two scoops of 'Hooah'", and a large wooden ice cream bar sign on the top, no less.

Where it came from, I don't know. I'm kind of afraid to ask. Did they buy it? Did they pimp someone's ride? Was it donated? Did they just find an ice cream truck somewhere? I honestly don't know. The ice cream is quite tasty, though, I must admit.

Side note: I used to play Jagged Alliance 2 in high school and college. One aspect of the game included the player "acquiring" an ice cream truck in order to carry gun-toting mercenaries, as they wage a guerrilla war on an island. Looks like life imitates art. Or video games.