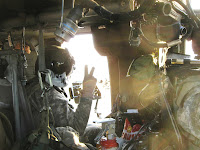 Before deploying, I took the cheap route and picked up a used holster for my 9mm pistol that I carry with me in the cockpit as a backup to the M-4 rifle. As time went on, and the holster became increasingly exposed to the elements, it began to look a little worse for wear. Unbeknownst to me, the little snap that was supposed to fasten the holster had fallen off, so I was essentially running around with a loose 9mm pistol.

How I found out about this is actually kind of funny--I was flying along, minding my own business, when I heard a slight "ker-thunk" behind me. With crew chiefs constantly moving equipment around in the cabin, re-positioning machine guns, and closing windows, I paid the little "ker-thunk" no mind. That was until I adjusted myself in my seat and realized that I couldn't feel the reassuring metal of the 9mm pressed against me.

I began to panic. Frantically, I searched the seat and adjacent floorboard to no avail. My heart instantly sank into my stomach as I suddenly began to think that, yes, I had now become "that guy" that lost a pistol while flying through the sky. I tried to remember when I heard the "ker-thunk", and calculated it to be several miles back--good luck finding a pistol in the middle of the desert. I had flashbacks of playing "Hands Across Fort Bragg" after a particularly unlucky night jump when a Soldier had accidentally jettisoned his M-16 rifle in the middle of the air. Would we comb the desert for a pistol in a hostile country?

Thankfully, after a little contorting, I realized that the pistol had merely fallen underneath the seat and into the maze of circuits and wires in the nose of the aircraft. That was a relief. It also marked the time that I realized that I needed a new holster. And a lanyard for the pistol might be a welcome addition as well...