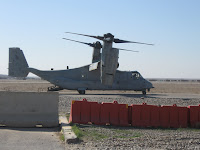 Any talk of the V-22 Osprey tends to bring up intense emotion, due to hugely vested interests either in promoting the aircraft or axing the aircraft.

Thomas Ricks just stirred up those emotions in a recent post about the V-22 Osprey at his blog over at Foreign Policy (add it to your RSS reader and your blogrolls, gentlemen). Ricks opened up the floodgates for both V-22 swooners and detractors. The heated debate over the aircraft lends itself to the extremists and not the moderates.

The controversy over the V-22 certainly will sound familiar to those who are acolytes of Air Force Colonel John Boyd. During the 1960s, the US Air Force had built a number of very technologically advanced and complex fighter aircraft at great expense. The problem was that the aircraft, despite the technological advances, weren't performing as well against Soviet-designed MiGs over Vietnam as they should have.

Colonel Boyd, who had developed the Air Force's manual on air combat maneuvering, spent his free time developing the theory of energy-maneuverability . According to this theory, the fighter which could rapidly transition from one maneuver to the next maneuver in combat would usually wind up the victor. Based on the energy-maneuverability formula, Boyd modeled the performance of American aircraft—most notably the expensive swing-wing supersonic bomber, the F-111 Aardvark—against Soviet MiGs. The results were not good for the F-111, which was designed to be the air-to-air fighter of choice for both the Navy and the Air Force. Although capable of intercepting enemy bombers from afar, the new F-111 would not be a match against even some of the more primitive Soviet MiGs in a twisting and turning dogfight. This flaw prompted Vice Admiral Thomas Connolly to testify before Congress, that there "wasn't enough power in Christendom" to make a fighter out of the F-111.

Additionally, the aircraft was notorious for mechanical failures, with mechanics during the 70s actually purchasing parts from Radio Shack to fix the aircraft. Its revolutionary "swing-wing" design, which allowed the wings to spread out for increased loiter time and to sweep back for high-speed dashes, wound up being so heavy and complex that any speed or lift advantage was practically negated due to the sheer weight of the mechanism used to sweep the wings.

Decades later, the V-22 came along. Much like the F-111, it also featured a revolutionary design feature that allowed it to drastically change its flight profile—in this case, tilt-rotor technology. Tilt-rotor technology was advertised as being able to render helicopters obsolete. Every branch of the US armed forces took note.

Unfortunately, tilt-rotor technology proved to be more dangerous than swing-wing technology, and likely far more expensive. During its extensive development period, the Osprey had no fewer than four high-profile crashes. It also had the reputation of being a "hangar queen", needing extensive amounts of maintenance to keep it aloft. It sat out a good portion of the war thus far stateside.

Only within the last year did it see its first combat debut with the US Marine Corps in Anbar province. To be certain, the combat performance of the Osprey was under close scrutiny, with both detractors and supporters carefully studying every detail of the deployment in order to make their case either for or against the aircraft.

I've often made fun of the Osprey. I think a few months back, I likened it to a Transformer, noting that the only way it could be useful in combat would be if five Ospreys transformed and joined together to form the Decepticon Devastator. I've since been corrected. I won't go so far as to say that the Osprey has been the greatest thing since sliced bread in Iraq, but it has actually had a relatively successful deployment thus far over in Anbar Province, where the Marines operate.

A number of the criticisms leveled against the Osprey are unfair. One poster in Thomas Rick's blog laughed at the Osprey's initial deployment into Iraq, noting that one of the dozen Ospreys was stuck on the ground in Jordan for four days.

All former and current aviators: raise your hand if you've ever had an aircraft stuck somewhere due to maintenance (all hands should go up). Ever have one stuck at a base for three days? I did. A few months back, I was stuck with a broken Black Hawk at Joint Base Balad for three days. The aircraft was worked on by maintenance crews around the clock (although, granted, they had other aircraft that needed repair), and there was no shortage of parts at the base. Sometimes, you just have one of those odd mechanical issues that takes forever to troubleshoot. In this case, two engines were producing drastically different levels of power—and the one that was producing less power was actually the good engine. It's certainly not an everyday occurrence, but it does happen. In fact, I know of one captain that had to Remain OverNight (RON) a couple of times in the span of a few weeks due to maintenance issues and weather, earning him the nickname "Captain RON" (complete with photoshopped picture).

It also complicates things when you make a precautionary landing in Jordan. Anyone know where to get Osprey parts in Jordan? I don't.

Anyway, as near as I can tell, the Osprey has not had a major accident during its deployment. It seems to do well at "FOB-hopping"—using its speed advantage to hit several different FOBs within a day. While great for shuttling around VIPs to a number of engagements, I have questions about its abilities in air assault type operations, which is a mission set that I haven't heard of the Osprey performing (although Osprey pilots are welcome to chime in here provided that they keep OPSEC). The size of the aircraft and the downwash seem as if it would be difficult for hovering rescues and air assault operations, although one Osprey pilot weighed in and noted that it actually did quite well in dust landings in the desert. I still have doubts about its ability to set down on mountain sides and in confined areas.

The Osprey isn't the death trap that many initially thought it would be, and it actually does some missions quite well. It may not be the "next huge leap forward" that it was advertised as, but after flying around "Marine Land" (Anbar province) and seeing the Osprey in action, it's safe to say the Osprey is going to be here to stay.

And I say this as someone who is neither connected with the Osprey nor any program which seeks to replace it. So there.

Edit: As I was writing this, an Osprey pilot posted an excellent analysis and synthesis of the arguments for and against the Osprey.

Dude, nowadays we chicks bring home the bacon; keep up on fashion with ELLE magazine( Jun 09: Megan Fox, the Body Issue); keep up with the latest in national security + COIN on the blogosphere; AND color in the OODA loop in our spare time.

And for my money Laura Rozen over at Foreign Policy smokes Tom R's ass.

For your sins, recommend you add feministing.com to your blogroll. (Preferably right behind Boss Mongo.)