The US Army is in second place, shortly behind the US Marine Corps, in Soldier's Angels 2009 Valour IT Project. This campaign is a friendly competition among milbloggers representing the four branches of the Armed Forces, and benefits wounded service members returning from Iraq and Afghanistan by providing them with voice-controlled laptops and other tech gear during their recovery.
In order to raise more money for the US Army Milblogger team, I considered resorting to drastic measures. I considered auctioning myself off to the highest bidder in order to raise money for this cause. (As an added bonus, I put out on the first date. Hey ladies.)
Now, before I resort to, well, manwhoring myself out, I have to realize that sex does sell. And I know exactly what kind of guy is reading my milblog. That's right, geeks.
Now, I met this girl on the Halloween. Note that she is dressed as an elf from Lord of the Rings, has a lightsaber (provided by me), and plays World of Warcraft. Seriously, that's like a trifecta 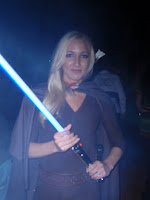 of geekness right there. (Hopefully she doesn't sue over this picture). So all you geeks who are coming to this site with Google search strings which say "chick", "lightsaber", "elf", and "World of Warcraft"...please click on the following link.
Posted 18:26

Cool story as for me. It would be great to read a bit more concerning that theme.
BTW look at the design I've made myself Russian escort