Your Cultural Awareness for the Day

A number of pundits are weighing in on President Obama's bow to Emperor Akihito of Japan, to include one writer in the Los Angeles Times who asks "How Low Will He Go"? The crux of the arguments coming from the right echo the sentiment that the President of the United States should bow to no one.
This simply isn't true.
During the Vietnam War, some American prisoners of war refused to bow to their North Vietnamese captors. In Asian cultures, bowing was not seen as a sign of submission, but rather one of respect. (Keep in mind that service members in captivity are required to 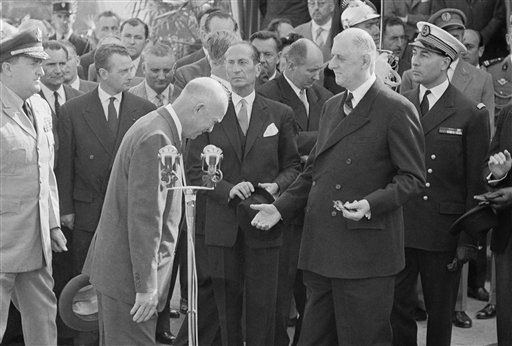 render basic military courtesy and respect towards their captors). American serviceman suffered terrible beatings at the hands of the NVA for refusing to bow. In response, Admiral Jim Stockdale, the senior ranking officer in the Vietnamese POW camp, insisted that American POWs simply not bow in public, so as not to provide propaganda for Western audiences, who would interpret the bow as a sign of submission.
It's not a sign of weakness, it's a sign of respect. Even Richard Nixon bowed to Emperor Hirohito.
(Pic: President Eisenhower bowing to Charles de Gaulle)
UPDATE: I have received exclusive video of what people think that President Obama's capitulation in front of Emperor Akihito must have looked like.

There’s an etiquette to the ritual of bowing. It’s pretty simple,really, but, at a diplomatic level it gets a little complicated, especially between heads of state. Presumably the State Department’s Assistant Adjunct Vice Deputy Associate Undersecretary of State for Bowing spent some time with POTUS instructing him in the finer points of calibrated bowing. Basically, you’re expected to bow deeper to those who outrank you and less deep than those whom you outrank. Visitors equal in rank to their host should bow slightly lower than their host. It looks like POTUS got a little carried away, but the good news is that the Japanese don’t care — they almost expect that gaijin are going to do it wrong and don’t either take offense or treat it as something funny (at least in public — privately, after a few biru, might be a different story); the important thing is that you, as an uncouth barbarian, make the effort.

Our hyper-sensitive political commentariate could do with a little more Japanese-like restraint when it comes to nit-picking about this stuff.

Yeah I thought he went down a little too far, but Obama's tall, the Japanese emperor is short, what can you expect? And there's something about the shoulders and neck, Americans can never keep the straight posture required for a proper bow. I guess it's in the upbringing.

But yeah, way too much conservative press for such a routine affair. But they have to howl at the moon, don't they?