Dear Switzerland: About this Minaret Ban

Hey, it's America.
Listen, we need to talk.
Look, this week we found out that you voted to ban the construction of minarets in your country. Your eligible voters gathered, en masse, to vote on the referendum, with 57% of voters electing to prevent the construction of four more minarets in Switzerland.
Maybe you guys didn't think this one through all the way.
We understand that, since the fall of the Berlin Wall, and the breakup of many Soviet client states (i.e., Yugoslavia), you've seen an influx of immigrants from Eastern Europe flooding in as refugees. You see, I don't know if anyone told you this, but you wound up with a bit of a reputation--that of an international refuge. Chalk it up to your history of staying neutral in just about everything (even against Qadaffi), your habit of staying out of wars, and the sheer number of international governing and relief organizations which have taken up residence within your borders.
We understand that many of these new refugees were distinctly, well, not "Swiss" enough for you. We get it--national identity is important to you. "Swissness" has practically become a
marketing slogan, with your little cross being engraved on knives, watches and cheese wedges all over the world.
We also understand that a few hundred thousand of these refugees practice Islam. As part of their religion, they build mosques with towers next to them. In many Muslim countries, they broadcast a call to prayer from these towers, but fortunately, your noise ordnances prevent them from doing so. Really, what upsets you is that minarets and crescent moons are in stark contrast to steeples and crosses.
We occasionally do the same thing in America, too. We've had issues with immigrants ranging from the Irish, to the Japanese, to the Mexicans. We sometimes feel we're about to lose our national identity as well--occasionally we have panics when we think that kids will suddenly start speaking Spanish instead of English.
But we don't ban Mexican culture from America. In fact, what's great about America is that we embrace all cultures--we take a little from them, they absorb from us. We've had our issues with equality among races and ethnicities, to be certain, but our shared common experiences give all Americans--regardless of their background--a sense of identity.

We understand that you might feel a little paranoia about the Muslim community, judging by this anti-minaret poster that's been posted all over Switzerland. I don't know if we've told you this, but occasionally, we've had our issues with the Muslim community, too. See, occasionally, a few upset Muslims might hijack planes and fly them into skyscrapers, or go crazy and shoot Soldiers on a military base.
Every time something like this happens, we call for calm and say that we don't want to see reprisals against Muslims. The funny thing is, for the most part, there are shockingly few reprisals against Muslims--even after the September 11th attacks.
Seriously, look at this poster. It includes everything stereotypical about the Muslim community. Minarets stick up out of the Swiss flag like missiles. A woman in a burqa is in the foreground--puzzling, since most Muslim immigrants in Europe are from the Balkans and Turkey, where women typically don't wear burqas (and trust me, we Americans get around the Middle East quite a bit).
Imagine if I blatantly stereotyped the Swiss in a "get out" poster. It might look something like this: 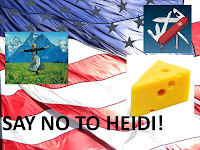 (And yes, I know that the Sound of Music was actually supposed to be in Austria. See, we too can blatantly misrepresent other cultures.)
Pretty ridiculous, huh?
But if the appeal towards tolerating other cultures doesn't appeal to you, maybe this will:
Consider this--the US isn't too popular in the Muslim world. This is actually kind of a blessing in disguise for Europe in many ways. First and foremost because it takes a lot of bad attention away Europe. And, after seeing France's recent attempts to ban veils on Muslim girls, Europe is lucky indeed to have America and Israel provide Islamic terror organizations with a convenient diversion.
I'm sure that, in the back of your mind, you did this to keep takfiri jihadists at bay. After all, Qadaffi said some scary things about you. I mean, you do go out of your way not to upset people, and Qadaffi talks smack about you? But keep in mind, that this can backfire, and truly provoke jihadists.
Seriously, this is the sort of thing that incites violent protests. No joke.
Ask your buddy Denmark.
Sincerely,
The United States of America
Note: This was in no way, shape, or form intended to encourage any sort of violence against any European government. Let me make that abundantly clear. Satire aside, I think that not only does this infringe on civil liberties, but it also has the very real potential to provoke more violence than its supporters had envisioned.
I hope I'm wrong, and I hope this was all just satire.
Posted 20:00

The bottom line is that Europe is about to get pwned by Muslims. The Europeans want the Muslims to convert into good secular democratic non-religious wine-sipping Europeans while the Muslims are only there for the economic benefits. I agree with you that this attempted ban on minarets is as stupid as France's ban on burkhas - ill advised and anti-"democratic" at its core.

But the underlying reality here is clear: Europe wanted to be the "savior" and graciously took in millions of Muslim refugees over the last 25 yrs and now that the reality that these immigrants are by and large NOT assimilating & adopting secular European "values" has hit home, the Europeans are now trying to restrict them. Too late. The Balkans are now all of Europe.

Here's an interesting & informative article on the topic of Switzerland:
http://www.azure.org.il/article.php?id=514

Glad you didn’t suggest a ban on Swiss chocolate! You woulda lost me if you wanted to ban Swiss chocolate. There are certain European exports that a sophisticated gentleman like me just can’t do without: German beer, French wine, Swiss chocolate and Scandinavian women.