Transformers II: Revenge of the COINtras

The US military's focus on counterinsurgency (COIN) operations has made many in the defense community uneasy, such as Col. Gian Gentile. According to these "COINtras", the US military's conventional combat capabilities are eroding, potentially putting us at a severe disadvantage should the US military ever face a conventional, near-peer opponent.
Certainly, many of us have looked around and wondered whether or not a neer-peer competitor was out there. Well, it looks like I have apparently found one. Ladies and Gentlemen, our focus on counterinsurgency leaves us woefully unprepared to wage a conventional war against the Revolutionary Republic of the Decepticons.
Seriously, the geo-political-military situation in this movie is too atrocious to ignore, particularly given the amount of assistance--both personnel and high-tech equipment--the military gave the makers of the movie. Let's examine the poor use of military and political tactics within this movie, shall we?
National Sovereignty Fail
In the beginning of the movie, we discover that a Decepticon is running rampant through the streets of Shanghai. The Autobots are called in to assist a strike group consisting of several UH-60 Black Hawk and AH-64 Apache helicopters as they zoom through the buildings of Shanghai, shooting everything in sight in an attempt to destroy the Decepticon. Somehow, the helicopters are not instantly shot down by the Chinese, who don't subsequently threaten to invade Taiwan or declare nuclear war on the US.
English-Speaking Jingoism Fail
The first live-action Transformers movie was accused of being far too jingoistic, in that the US military is world's last defense against the Decepticons. I order to recognize the value of our allies, Transformers II takes the "GI Joe" approach and introduces a multi-national anti-Decepticon task force, consisting of...Australia, Great Britain, and that's it. No other countries, in the Transformer universe, have special forces. Well, at least not special forces who are skilled in full-spectrum operations, ranging from counterinsurgency to anti-Decepticon action.
Soft Power Fail
While many in the military and foreign policy fields--such the current US Secretaries of State and Defense--advocate the use of "soft power", there are limits. Indeed, as President Barack Obama noted during his Nobel acceptance speech, soft power and diplomacy would not stop the Nazis, nor would it deter the hard-core fanatics within al Qaeda. Nevertheless, in Transformers II, President Obama is seen advocating diplomacy with a race of robots bent on genocide via the destruction of our sun.
Education Fail
In Transformers II, Shia Lebouf is seen leaving for college without taking Megan Fox along.

Seriously, what the fuck is he thinking? (And you thought I stopped posting Megan Fox pictures)
Homeland Security Fail
So in Transformers II, there's this little robot named "Wheels", who appears to be an analogy to the diminutive "Wheelie" robot from the original Transformers movie (from the 1980s). Except while the 1980s Wheelie is a childish, annoying Autobot who speaks in rhyme, his 2009 incarnation is a diminutive, malevolent Decepticon who eventually develops a crush on Megan Fox and humps her leg. I'm
not making that up, either, a little Tonka truck transforms into a tiny Decepticon and actually humps Megan Fox's leg. Well, then again, if I were a little Tonka truck Decepticon, I'd hump Megan Fox's leg, too. Fuck, I'd do that even if I weren't a Decepticon.

Anyway, Megan Fox disables Wheelie as he attempts to attack her, and she tortures him for information. And when I mean torture, I don't mean pouring motor oil into his robot mouth in a bizarre Decepticon waterboarding ritual, she flat-out takes a soldering iron and melts his fucking eye off. If that isn't enough, she decides that she needs to fly across the country to meet up with Shia LaBeouf, all the while holding Wheelie hostage. How does one get a Decepticon across the country in a hurry? Well, apparently, you can put a laser-wielding Decepticon in metal box with chains and take it through security at any airport. All the while, no one at TSA thinks that it's suspicious that she's checking a metal box through as her luggage and absolutely nothing else. I guess it's only suspicious when Nigerian terrorists fly with no luggage, not when Megan Fox flies with no luggage.
Transformers Plot Fail
So, wait, if Shia LaBeouf already has a piece of the Allspark, why doesn't he use that to revive Optimus Prime? Not that Optimus Prime's "death" is really that tragic--we all figure that he will be brought back to life by the end of the movie. Now, when he died in the 1980s cartoon movie--which was a blatant attempt to discontinue the old toy line and introduce new toys by killing off kids' beloved heroes--that was tragic.
Task 2048 (Perform Sling Load Operations) Fail
After Optimus Prime dies, we kind of accentuate the tragedy by having a

helicopter sling-load his dead mechanical corpse back to the US military base and literally drop his dead body on the ground in front of the rest of the Autobots. Seriously, the aircrew training manual says that you wait until the load is on the ground and have slack in the sling before you release the cargo hook (after hovering laterally away from the load, so as not to damage it with the clevis). Nevertheless, I think they should add "unless you are attempting to create a dramatic effect, in which case, the pilot may drop the load from ten feet, but only if the cameras are filming in slow-motion, there's a layer of dust the corpse will kick up, and the onlookers have their hands over their open mouths, in shock."
Geography Fail
There's a lot happening during the final, big battle. The problem is, we really have no idea where it's taking place. Apparently, it's in the desert near the Jordanian/Egyptian/Israeli border where all of the following landmarks are within walking distance (in reality, they are all several hundred miles apart):
The city of Petra in Jordan
The Gulf of Aqaba
The Mediterranean Sea
The Pyramids (at Giza?)
Note that I say say the Jordanian/Egyptian/Israeli border, although the movie would have you believe that Jordan and Egypt actually share a border. Admittedly, they do come close, but in order to walk from one point of the battle in Jordan to another point of the battle in Egypt, you kind of have to, well, cross the Israeli border. Something tells me the Israelis don't take too kindly to tanks rolling across their border to transit from one battle to the next, even if they are American.
Sabot Rounds Fail
Remember in the first Transformers movie, we learned that only special rounds could pierce

the armour of the Decepticons? They couldn't be destroyed by air-to-ground missiles, nor by an A-10 Warthog's massive GAU-8 30mm cannon. Only very large rounds fired by an AC-130 Spectre Gunship could pierce Scorponok's skin. Nevertheless, the troops in Transformers II falls victim to the "Godzilla Effect", whereby they expend thousands of rounds into the Decepticons, to no effect, whereupon they just keep firing rounds into them anyway. Sense? This makes none.
Big-Budget Weapons Fail (B-1B, Zumwalt-class destroyer, Future Combat System, etc)
Hi, are you a senior-level defense official trying to develop a weapon which has little use in the counterinsurgency environment? If so, then why not convince the American public that your multi-billion dollar project is still viable by showing its applicability in Major Intergalactic War! During the final battle, when tanks roll ashore in...Petra, Jordan...or something...you half-expect one of the COINtras to jump up in the middle of the battle and say "When you're saluting your Decepticon overlords, you'll bet you hadn't cancelled the Future Combat System!"
The most laughable instance occurs near the end of the battle, when a bunch of robots combine together to make the super-Decepticon Devastator, who even comes equipped with a giant robot scrote-sack. Devastator is ripping apart the Pyramids of Giza, because they are actually built over a giant machine the Decepticons built thousands of years ago to destroy the Earth's sun.

Anyway, fortunately, there's a "battleship" in the Mediterranean that can help. Although it's not actually named, the fact that it's called a "battleship" and that it has a massive rail gun for the naval gunfire support role leads me to believe it's actually the billion-dollar DDG-1000 Zumwalt-class destroyer.
Although there is considerable disappointment over the destroyer--its lack of adequate air and ballistic missile defense systems, its size, cost, and so forth--let it be known that the movie showcases its capabilities. Its network-centric warfare C3I systems can receive communications from an ex-government employee running around the desert with a walkie-talkie radio. That's how good it is. It also has a rail gun for some reason, even though rail guns are several decades off, but that's okay. Anyway, if you need to shoot a massive robot on top of a Pyramid, the DDG-1000 and its non-existent rail gun are just the thing for you.
Combat Lifesaver Fail
Seriously, is this part of your CPR certification? During the climax of the movie, Shia LaBeouf falls unconcious and has a near-death experience. Not to worry, though, because Megan Fox knows CPR. Who needs to remember silly thing like the ratio of compressions to breaths, when you can just scream "Why?" "No!" and "I love you!" at the heavens in vain, with the camera capturing you from above. Cracked.com has the Megan Fox guide to CPR: 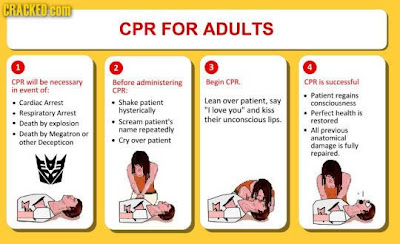 Theology Fail
Last but not least, Shia LeBoeuf's near-death experience raises a number of serious concerns. Chief among these is the fact that, in Transformers II, there are Autobots in heaven.
What. The. Fuck. Autobots have souls?
Conclusion
Does the military have a support group for COINdinistas who saw Transformers II? I might need that.
Posted 10:02

Awesome post. I haven't seen the film (saw the first one though) but laughed a lot reading this. Thanks and keep up the good work!

jajajaja, you make me laugh to dead with the CPR explanation Megan Fox style, seriously this movie is a total waste of time and money, the only good thing in this movie is miss Fox and not for her acting quality.
Buy Viagra Cheap Viagra