You learn something new every day... 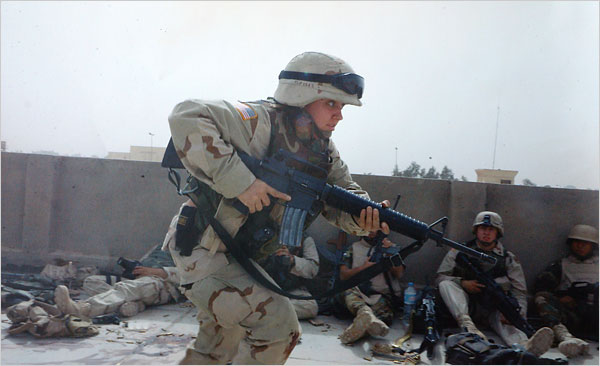 Last night, I learned that the US military has a policy of not allowing women to engage in direct combat with the enemy.
This came as news to me.
Photo: Sergeant Theresa Lynn Flannery of the 350th Civil Affairs Command; recipient of the Bronze Star with Valor Device, Purple Heart, and a former Miss Teen Madison County. Sgt. Flannery is one of many women decorated for valor during the wars in Iraq and Afghanistan.
Posted 06:20

I guess being an 88-mike isn't direct combat though if you asked the TCs back in 2004, they would have viewed it differently.

I'd take anything written by Lizette Alvarez with a grain of salt. We are talking about the "reporter" who painstakingly compiled a thoroughly unscientific database of "military killers" from media reports (with no account made for post-911 selection bias inherent in depending on news reports from a period where journalists were inherently more sensitive to claims of PTSD by defendents with some military service) that the NYT's own ombudsmun eviscerated in what had to have been a painful postmortem (she also completely neglected to make any note of the many, many more cases she turned up that simply involved first-term enlistees with no deployments and a very short record of military service).

But in this case, she lost me at: "Women are barred from joining combat branches like the infantry, armor, Special Forces and most field artillery units and from doing support jobs while living with those smaller units. Women can lead some male troops into combat as officers, but they cannot serve with them in battle.

Last time I checked, I believe the policy was that women cannot enlist in specified "combat arms" professions... no one guaranteed anyone wearing a uniform today that they couldn't possibly see combat, unless they were lying through their teeth. I don't believe there's any "bureaucratic trickery" involved in the thousands and millions of women who have served in intelligence, bomb disposal, etc. except in the delusional mind of Elaine Donnelly, a crackpot coalition of one whose "group" is a one-woman show with no other membership that I've been able to determine in at least 5 years of reading her pontificate about how gay men and women in general just don't belong in the U.S. military... truthfully, any mention of her name or "organization" ought to be a red-flag for any editor worth his or her salt, since her only function in any article is to provide a cheap and easy inflammatory quote.