Two can play at this game...

Today, Adam Elkus alerted me to the fact that Qadaffi's at it again--declaring war on Switzerland in a recent interview in Spiegel. Says Qadaffi about the source of his alleged anger towards the Helvetic Republic:

SPIEGEL: Doesn't your anger with Switzerland in reality stem from the fact that your son Hannibal was arrested by police in Geneva in July 2008 and accused of beating up two people in his employment?
Gadhafi: The thing with Hannibal has been nothing but a source of enjoyment for Switzerland. This is a gang that doesn't care about law and order. The way they treated Hannibal proves that Switzerland respects no laws. A man employed by my son brought accusations against him so that he could remain in Switzerland. They can lock him up -- but please do so within the law. The police acted like a gang. They were dressed in plain clothes and they broke down the door, put my son in chains and brought his wife to a hospital. They left his daughter, who is one or two years old, alone back at the hotel. Then they put him handcuffed in a cold storage room, and at times in a bathroom -- exactly the way al-Qaida treats its victims. An act of terrorism.

SPIEGEL: According to the Swiss authorities, something entirely different happened in Geneva. They say that your son beat up two people there.

Gadhafi: No, no. Nothing like that happened. Switzerland has not said that to me nor to anyone else. I'm hearing this now for the first time.

SPIEGEL: But similar things have also happened elsewhere. Your sons have also run into trouble with the police in London, Paris and Germany. What do you say to them when something like this happens?

Gadhafi: These are cases of youthful exuberance. In France, for example, my son allegedly drove through a red light. That is normal and nothing out of the ordinary.

SPIEGEL: Allow us to ask once again: Are you really hearing today for the first time that your son allegedly severely beat two people?

Gadhafi: Yes, I'm hearing this now for the first time. All I heard was that the employee complained that Hannibal and his family had mistreated him. I oppose such behavior, whether it is in Switzerland, in Libya or elsewhere. What I am protesting against is the way action is being taken against him.

I'm certain I'm not the only one who finds it mildly amusing that Qadaffi's son from the North African coast who travels through the Alps causing mayhem is named "Hannibal". But never mind that. What is important is the concept of simply dissolving countries based on illegitimacy. I wonder if I can simply declare a country to be an aberration?
I mean, I am suitably dressed to do so: 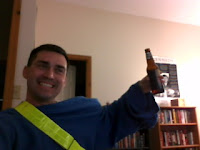 With that said, I have officially abolished the country of Liechtenstein. In related news, Adam Elkus has annexed the nation of Monaco, declaring it the Grand Duchy of Elkusistan. I figure the country of Andorra has been a little too quiet recently, so we'll annex that one too. The three countries together must have been plotting together as some sort of axis: The Axis of Anonymity, I'll call it.
Are there any other countries I can abolish just for the hell of it?
Edit: Karaka Pend tackles this same issue.
Posted 20:12

Looks like you're suitably lubricated for this heavy responsibility as well. Keep up the good work!

I was mildly disturbed when I saw the Snuggie, but then everything was cool because he was wearing his royal PT belt. All is well in this kingdom.

You look like the premier Jedi Knight of Beertonia (just smoosh Poland, Ukraine, and Lithuania together, you'll be golden). Now all you need is a flag! The hoppy golden flag of Beertonia.