Noah Shachtman of Wired.com touted this as the most ridiculous PowerPoint slide ever.

If John Paul Jones were alive to command a combat fleet today, he'd likely laugh at Noah, exclaiming that he has not yet begun to unleash Death by PowerPoint.  Thus, I challenged Noah and Spencer Ackerman to a PowerPoint-off.

You, too, can submit your most ridiculous PowerPoint slides by e-mailing the crew at the Danger Room.  Be sure to follow along with the #pptranger Twitter tag, as PowerPoint hilarity will undoubtedly ensue. 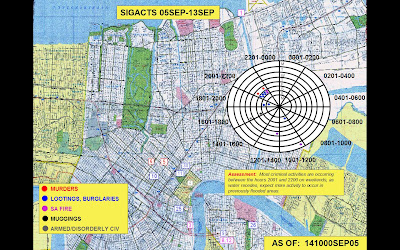 Go ahead and click on the slide for a better view of the circular chart in the middle.  Try to make sense of it.

Anyway, so there I was, at St. John the Baptist Airport, a small airfield on the outskirts of New Orleans.  I had, unbeknownst to many, just been promoted to captain two weeks previously.  However, in the haste to leave for New Orleans, I hadn't had the time for a promotion ceremony, so I still wore first lieutenant rank.  (But with captains' pay, which is the best of both worlds.)

Now, it's an understatement to say that New Orleans was a nuthouse even two weeks after the hurricane hit.  Hundreds had died, and thousands more throughout the Gulf Coast were homeless. Looting, vandalism, and violent crime were rampant, and helicopter air crews still lived with the very real fear of surface-to-air gunfire.

Thus, our S-2, the battalion's intelligence analyst, was charged with compiling a list of SIGACTS which chronicled violent crime in New Orleans.  Using a pattern analysis wheel, she attempted to discern the underlying trends in violent behavior in New Orleans.

After I finally made sense of the slide, I began to understand the true nature of the threat.

Throwing the slide in front of a crowded tent during a Commander's Update Brief (CUB), two dozen officers spent several minutes intently studying the slide (or at least, pretending to).  Once I figured out the mystery behind the pattern analysis chart, I slapped my forehead in one of history's greatest "Eureka" moments.

"Do you mean to tell us that most violent behavior in New Orleans takes place on Friday and Saturday nights", I asked.

That was, indeed, what the slide was attempting to impart upon the poor audience.

I'll do my bit to help the intelligence community with another profound bit of NOLA-Intel:  the number of boobs flashed in New Orleans increases roughly seventy five million percent during Mardi Gras season.  Your satellites tell you that?

Like so many frustrated PowerPoint Rangers, my issue isn't with PowerPoint, per se, it's with tired communication.  We wind up saying less and less; but we certainly spend more and more time doing so.

Edit:  By the way, take a look at the high-quality map the engineers were able to provide us during Hurricane Katrina.  Is it any wonder I decided to use Google Earth for kneeboard packets?

I think the best duh comment is to expect more activity in previously flooded areas as the water recedes. Ya think?

I have seen too many egregious slides over the years. But if you want to know about a trend I think is getting worse, it is the like of citing sources on powerpoint. I am in the intel side of the house so I see this a lot: one organization makes a link diagram or intel assessment, then everyone copies it for their own product, but no one knows the facts underlying the product.