Enough complaining, what do we actually do about suicides?

There's no easy way to quell the Army-wide rise in suicides; the problem is simply larger than the Army's senior leadership.  Dar too much has been asked of too few for too long.  Yet, I do see two ways the Army's senior leadership can help commanders prevent suicides.  And they're not that difficult.
1.) A Permanent Counseling Packet.  With manning shortfalls, commanders are often forced to deal with a "shell game", swapping soldiers around from position to position, and transferring soldiers from overmanned units to undermanned ones.  This is only exacerbated by the fact that the Army has the dubious habit of transferring problem soldiers as opposed to nipping them in the bud (e.g.,  Major Nidal Hassan, the Fort Hood shooter).  Not to mention, first-term soldiers--one of the most at-risk groups--sometimes arrive at their first units with documented issues from Basic Training and Advanced Individual Training, none of which are passed on to their commanders.
When a soldier moves from one job to another, his or her problems transfer with them.  However, those problems are not always apparent to commanders.  As much as the Army preaches "engagement" with peers and subordinates, it takes time to truly know a soldier.  Moreover, a crafty soldier can easily conceal problems with drugs, alcohol, sexual misconduct, or criminal behavior.
One of the most important tools in curbing dangerous behavior--and eliminating problem soldiers--is counseling paperwork (the Army's DA Form 4856).  However, the fine print on the counseling form stipulates that it should be destroyed upon reassignment.
Wouldn't it be useful to be aware of high-risk behavior, which often goes unnoticed as soldiers move about? In a digital Army, it should be easy enough for commanders to access previous counseling records, letters of reprimand, and evaluations.
This isn't a revolutionary idea, either:  it was mentioned during the DoD's review of the Fort Hood shooting.
2.) Reduce the Separation Authority.  I think it's time to admit that we face a mounting discipline problem which will require years to fix.  The instances of misdemeanor activity among soldiers has nearly doubled over the past five years.  In almost a third of those cases, no disciplinary action was taken whatsoever.
Certainly, company commanders need to take action to either rehabilitate or get rid of problem troops.  But this is easier said than done.  For example, the Army has seen a precipitous decline in the number of soldiers chaptered out for obesity in recent years. 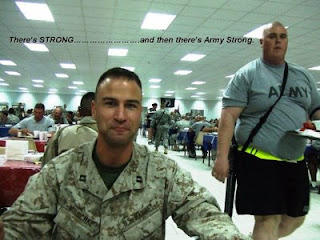 Don't think for a moment it's because we have fewer obese soldiers, either.﻿
Part of the problem, in my humble opinion, lies with the fact that separation authority has been taken from battalion commanders and raised to the "special court-martial convening authority" (in many cases, a two-star general)--a full two levels of command. Why?  Because commanders were doing exactly what they should have been doing--kicking sub-par first-term soldiers out of the Army.  According to ALARACT message 110/2005:

WE ARE AN ARMY AT WAR AND INCREASING LEVELS OF ATTRITION OF FIRST-TERM ENLISTED SOLDIERS IN BOTH THE TRAINING BASE AND UNITS IS A MATTER OF GREAT CONCERN. WE NEED YOUR CONCERTED EFFORT TO REVERSE THE RECENT NEGATIVE TREND IN FIRST-TERM ATTRITION. BY REDUCING ATTRITION ONE PERCENT, THE ARMY CAN SAVE UP TO 3,000 INITIAL-TERM SOLDIERS THAT'S 3,000 MORE SOLDIERS IN OUR FORMATIONS. EACH SOLDIER RETAINED REDUCES THE STRAIN ON RECRUITING COMMAND AND OUR RETENTION PROGRAM, WHICH MUST REPLACE EVERY SOLDIER WHO DEPARTS THE ARMY EARLY.

With the clear link between substance abuse and suicide, why have we taken away the right of battalion commanders to chapter soldiers under the provisions of Chapter 9, ""Alcohol or Other Drug Abuse Rehabilitation Failure"?
If we acknowledge that the brigade combat team is the US Army's unit of action, why not at least give brigade commanders the authority to seperate problem soldiers from the service?  Or return the authority to battalion commanders?  Not having to go all the way to the two-star level would help company and battalion commanders quickly eliminate troublemakers.
If anything, policies such as this send a mixed signal throughout the ranks.  On one hand, commanders are told they're not doing enough to curb risky behavior; on the other hand, the authority to actually do something about it has been taken away from them.
Posted 08:58

I completely agree with you. There has to be Zero Tolerance for drug use in the Army. It blew my mind to see that a Soldier could stay in the Army after popping on a piss test.

I had always assumed that a positive urinalysis was an automatic way out of the Army. Apparently, that's no longer the case...

1) The flip side is that getting fat, failing the PT test, or pissing hot doesn't earn a disgruntled soldier a get out of Army free card. But if the soldier is doing that, there's likely other problems going on.

2) Counseling forms are way too informal with little safeguards to become a permament record. Sooner or later those would go into promotion packets as well. Should a one time incident years ago go against that SFC or LTC?

So rather than a permanent record of counseling forms or destruction on transfer, why not make it a rolling three year file? If poor performance is going on for that length of time or is constantly reoccurring, then it should be escalated to more formal actions, i.e. medical referral, nonjudicial punishment, UCMJ action, etc. If the soldier meets standards, then nothing more would be needed.

The downside to memorializing the counseling form would be that some other less formal method would be used instead for "giving the soldier another chance".