I'm going to need more coffee after viewing this one.

Thanks to RogueAdventurer, I happened upon Wikileaks' latest series of Tweets. 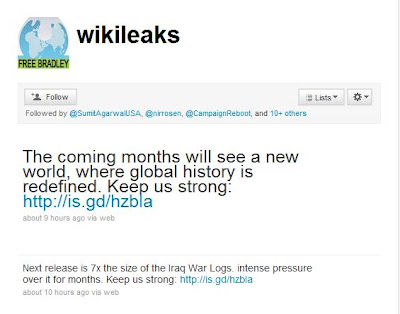 "Redefine the world"?  Sorry, but nearly unfettered access to the inner workings of the wars in Iraq and Afghanistan have hardly swayed public opinion.  The Afghan War Diary and the Iraq War logs have done little more than play into the public's pre-existing confirmation biases.

This may very well be the most ridiculous hype since the infamous "What is IT" campaign  which preceded the Segway.  Though it does raise the question as to what might be contained in the upcoming leak; my guess is that it might be over 260,000 US State Department diplomatic cables thought stolen by Bradley Manning.

I'm glad this is a short week for us Yanks, because I don't think I could handle this much facepalm.  I might be better off spending my time helping Doctrine Man find a new sidekick.  I think journalist Carl Prine might have the best idea for both a sidekick and a nemesis ever.

And in other news, Britain's Prince William might be having the best week ever.  Not only did he recently announce his engagement to Kate Middleton, but just hours after his announcement, he piloted his Sea King helicopter in a daring mountainside rescue of a stricken hiker.