Here's an even bigger problem... 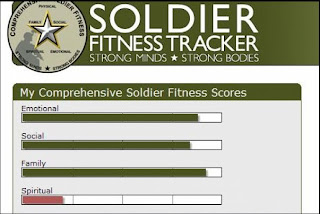 Recently, the blogosphere has been ablaze about the Army's "Soldier Fitness Tracker" (SFT), a computerized mental health assessment program.  The SFT's questionnaire rates soldiers' mental "fitness" in four separate categories:  emotional, social, family, and spiritual.  According to bloggers, Atheists, who might answer "no" to questions such as "I attend regular religious services", or "In difficult times, I pray or meditate", are generally assessed as being mentally unhealthy in the "spiritual" category (see picture left).

While issues regarding the separation of Church and State are, of course, a very relevant issue, there's something even more scandalous afoot.  Let's say a soldier did score in the "red" on a particular mental health category; would anyone care?  While statistics may be tracked, with personally identifying data removed, at the Department of the Army, failing every single aspect of the SFT won't result in a soldier being taken away to the nearest counselor in a straightjacket.  In fact, Atheists who "fail" the spiritual portion of the SFT might be less likely to see a mental health professional, as they might, understandably, scoff at the results.

Throwing money, endless surveys, and mandatory classes aren't curbing suicides.  However, I have a sneaking suspicion that suicides will begin to subside in 2015, when the Army won't be feeling the stress of two large wars, and won't be struggling to bring in an additional 27,000 troops, regardless of qualifications.
Posted 13:14

On the contrary, I'm convinced that some of the mandatory classes I've taken - particularly the long, online ones- have probably contributed.

In the active-duty Army, there's a suicide every 46 hours. Currently, 17 percent of the active duty force is prescribed anti-depressant medication. It's assumed that about one out of every 10 deployed soldiers goes over with an unresolved mental or behavioral health problem.

And then there are the aviators...

2 AAB 1 ID has a similar tracker leaders fill out on their soldiers on a monthly basis, and as part of a pass/leave packet. Failure to mitigate the risks associated with being "spiritually unfit" can lead to denial of favorable actions. So everyone just lies and checks the YES box.

Starbuck why do you keep blaming the two wars we are fighting, instead of looking to the most obvious candidates, Company Level leadership? That's what General Chiarelli initially blamed didn't he? (Sarcasm in case anyone didn't realize.)

I still can't believe the initial army report laid even some blame on Company level leaders, and sorry your post just reminded me of it. I get the feeling that our Generals look at soldiers on the line and think, "man when I was a PL I never would have let that happen".

Can I get a Soldier Fitness Tracker facepalm?

Mike: I don't know if you got a chance to read my part on the draft at offiziere.ch, but I kind of use the first portion (of three) to thumb my nose at the VCSA's diagnosis of a "failure of leadership in garrison".

Yeah I missed it the first time so I just re-read it. Again I just wonder how the committee members who wrote that report could include the whole the "failure of leadership in garrison" by Company grade officers in the report.

This kind of seems to be a theme in Army/Pentagon level study groups. It is all Generals/Admirals, with a few super high ranking politicians. Why can't you and I go in as the "Captain" level perspective? We could even blog about the study group as it is happening, bringing Pentagon study groups into the Web 2.0.