While counterinsurgency is an important skill for the US military, the future may lie in "hybrid wars", which is a term Secretary of Defense Robert Gates uses to describe conflict which combines conventional and unconventional warfare. In our operations in Iraq and Afghanistan, we have yet to see conflicts of this nature, with these environments looking more like classic counterinsurgency environments and ethnic civil wars.

However, the 2006 Israeli incursion into Lebanon gave us a glimpse of what this "hybrid war" might look like. One of the interesting features of this conflict was that Hezbollah was able to assemble a rudimentary air force, consisting of unmanned aerial vehicles provided by Iran. Unmanned aerial vehicles, of course, have been in use for decades. UAVs were first used during the First World War, serving as target drones to train pilots in gunnery skills. In the 1930s, radio-controlled planes became inexpensive enough to become a hobby, with companies such as the RadioPlane Company producing several models. RadioPlane, like many American industries during the Second World War, began to manufacture war material after the bombing of Pearl Harbor. They produced some 15,000 target drones, which were designated the RadioPlane OQ-2. 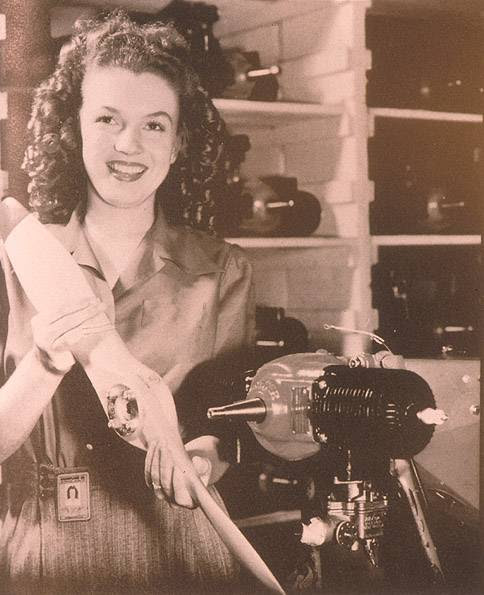 Second World War, most of these target drones were manufactured by women, as most men were drafted into military service. It was then that a young brunette employee at RadioPlane, involved in manufacturing radio-controlled drones, was photographed by an American journalist. The employee was an aspiring model named Norma Jeane, who later changed her hair color to blonde and her name to Marilyn Monroe. (This actually has nothing to do with my narrative on Hybrid War and UAVs. I just learned this about five minutes ago and thought it was interesting trivia.)

Advances in technology during the Second World War gave rise to the German V-1 "Buzz Bomb", which was a jet-propelled unmanned vehicle, although we might more correctly classify this as a "cruise missile". The US military, which began to pick up on jet technology after the war, operated a number of jet-powered unmanned aerial vehicles, to include the Firebee UAV, which was used in Vietnam as a reconnaissance platform.

GPS, computer, and communication technology, coupled with the relative simplicity of constructing lightweight unmanned vehicles—which are essentially little more than remote controlled airplanes used by hobbyists—have led to a mass proliferation of UAVs. UAVs can range from hand-thrown vehicles, such as the Raven UAV, to the monstrous Global Hawk, which is capable of reaching nearly any location on Earth from the United States.

In fact, as David Axe at War is Boring points out, describing a hand-thrown UAV as a modified toy isn't too far from the truth. Today, Axe ran a special on a Chinese UAV which appears to actually be a child's toy--the Chinese UAV even has a little tiny cockpit. Isn't that cute? I will laugh if there's actually a little tiny action figure inside of it. I know I'd be putting a Wedge Antilles figure in the cockpit, but that's just me.

Anyway, with the ease of manufacturing UAVs, it's a safe bet that we will certainly them used against us in the future. And the way to counter them isn't with SLAMRAAMs or F-22 Raptors. Although the jury is still out on what is the best way to counter enemy tactical UAVs.

Note: By the way, just to let everyone know where I stand on the F-22—contrary to many of the claims made in the last few days about not needing the F-22 at all, the fact that the airframes in our fighter fleet are falling apart due to age is enough evidence that we at least need some new aircraft. And based on the disturbing fact that in recent exercises, Russian-made Su-30s of the Indian Air Force have proven to be at least the equal of our F-15s and F-16s, we still need at least a few F-22s. 187 F-22s should do nicely—though not 600 like some in the Air Force would want. As Axe often astutely points out, we should have a balanced Air Force with enough tankers, attack planes and decent new fighters to do the job—not a handful of expensive wunderwaffen.