Sex sells, even for Hezbollah

Yeah, you could go to Abu Muqawama if you want hard-hitting analysis of the current situation in Lebanon.  Or you could go here for the Hezbollah news that really matters.  Seems that Hezbollah has been enlisting the aid of some scantily-clad young ladies in prominent locations during their rallies.  Well, scantily-clad by Hezbollah standards, that is: 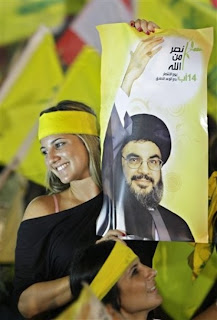 While Hezbollah paid veiled – or muhajjabat –supporters $15 per day for attending the demonstration, those who agreed to go unveiled were paid a little over $33 or 50,000 LL.


Dr. Hilal Khashan, professor of political studies at the American University of Beirut (AUB), suspected that this unique privileging of unveiled women by a party that encourages the wearing of the hijab among its women followers was because it “wanted [them] to look like Christians.” The appearance of unveiled women would have helped make the protest look like a national movement rather than a sectarian one.


As the Great Satan's Girlfriend would say, "Oh, it's true bay bee".

We didn't start the flame war

wow - you guys either are young high-school kids who are up way to early to post, or just disablied guys who can't get a job.... you are arguihng and calling people names because they/you were(n't) first? Wow - contribute something to the article and then say first ... wow

like add something like - that girl is pretty hot in that picture and I think she was in maxim's last issue? lmao

Lol, the same what ALL NATO Terrorists do: putting common people behind them while they talk sh..

have a look when the top world-terrorist talks (the US-president -doesn´t matter which one, the are ALL terrorists)

hello, my name is mr. greenthump