Most Awesome Week Ever (Again)

Well, since neither Weinstein nor Ackerman and Shachtman are willing to compose their usual weekly roundups, it looks as if I'm left to pick up the slack.  (Wait a second, are all of my favorite bloggers Jewish?  Seriously, between those three as well as Andrew Kravetz, Adam Elkus and Jon Stewart, I'm beginning to wonder if Jews really do control the media.  Will you people stop being so damned awesome!  Here are some IDF girls to placate you.)

Anyway, what made this week so awesome?  Well, how about Julian Assange reneging on his promise to release over 400,000 classified documents from the Iraq War?  According to Assange, it has nothing to do with a lack of funding for Wikileaks, or a power struggle among Wikileaks' leadership.  No, according to Assange, the truth is far worse:  it's because Wired.com is filled with nothing but tabloid journalists.  (That's right, Ackerman and Shachtman.)

Update:  A few minutes after I posted this, Captain Hyphen of Kings of War alerted me to the fact that The Guardian, the New York Times and Der Speigel have just posted exclusive coverage of the Iraq War Logs.

We also saw a number of incredible developments in defense technology.  Should a biological hazard occur, ladies are advised to remove their bras.  (Need help?  Call me.)  We also saw the blogosphere's reaction to Boyd-fest 2010.  Though, to be fair, the American strategist John Boyd is to strategy what Vanilla Ice is to rap music.

In other news, both Tom Brokaw (at the New York Times) and Mother Jones remind us that we're still at war; military medics save lives (though the FaST Surgeon could tell you that); and Britain is giving up on its naval aspirations, going so far as to field a carrier with no aircraft (which means the carrier gap is getting even wider...in America's favor).

Lastly, Twitter pals Diana Wueger and Lauren Jenkins have been sharing a panda hat.  Trust me when I say that this is the biggest news in the defense/foreign policy community. 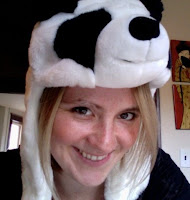 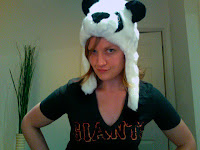 Yay, Jews! Now, back to my Shabbos-breaking.

If Britain is giving up her Naval ambitions (which made her great), then how is it in America's favor?
Isn't there rumors of cuts to America's military, especially the large carrier groups?

My numbers might be slightly off, but the US was about to decommission one or two carriers, commission one more, and halt carrier production for now. It's a net cut of one carrier (giving the US 10 total...far more than any other country)

The panda hat is so cute,i want get one again.I find this website http://www.hatsgoing.com have some panda hats,who can give me some idea about it?