Next in the reading queue... 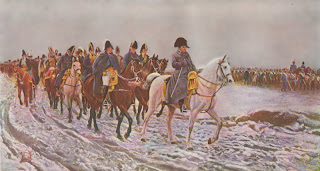 At the recommendation of the other half of Elkus-Burke, I've acquired a copy of Martin van Creveld's "Supplying War:  Logistics from Wallenstein to Patton".

Tom Ricks often says that amateurs study tactics, professionals study logistics, and people who "know what they are talking about" study personnel.  And while the title of the book suggests that van Creveld is concerned with merely the realm of supplies, the realm of logistics also involves the funding and raising of armies.

Personnel policies are irrelevant if soldiers aren't paid or fed.  Today, we take these issues for granted; but that certainly wasn't the case for the bulk of human history.  Just ask Napoleon about his vacation in Russia.
It's been quite an interesting read thus far.  I might actually go so far to say that some of the greatest inventions in warfare have been canned foods and preservatives, the internal combustion engine, cold-weather clothing and heaters, and night-vision equipment.  These allow armies to campaign anywhere they choose, for as long as they desire.  They also permit armies to operate day and night, and all year long--a relatively recent development in warfare.
It's in this light that Washington's achievements at the Battle of Trenton and at Valley Forge are all the more impressive.  It's also in this light that the difficulties of the British Army during the Revolutionary War--completely reliant upon supplies from Britain--are that much more understandable.
Posted 14:59

I just found the third volume of Edmund Morris's life of Theodore Roosevelt has been published. So that's next on my reading list.

During discussions about the fruitful aspects of wars, my trainee-paramedic sister has frequently reminded me of the fact that pretty much every piece of equipment and procedure that they use was pioneered by military forces.