If you haven't been inspired by the cry for equality, justice, and dignity coming from Egypt, you should be.  Social networking has empowered common Egyptians--oppressed, frustrated, and disenchanted with the Mubarak regime--to rise up against their master and take charge of their own fate.

Indeed, social media appears to be doing the same throughout the Middle East.  In nations like Jordan, Yemen, even Saudi Arabia, ordinary men and women are rising up against the ancien regime.

Who is to say that I can't do the same?
While the proletariat in Jordan and Saudia Arabia are rising up against their kings, I've committed myself to doing the same.  With Twitter, I can lead a revolt against another so-called "benevolent" dictator in my own corner of the world.
That's right, I'm starting a Twitter Revolution in Liechtenstein. 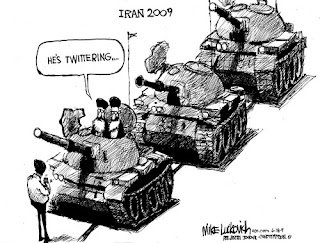 It's time we settled this "Twitter Revolution" debate once and for all.  And it looks as if Liechtenstein is ripe for revolution.  Like Egypt and Tunisia, it has a high rate of Internet and cell phone penetration.  It also has a population that's ready to be rallied around a grievance.  After all, let's face it, Liechtenstein's soccer team does suck.  And it's not like wars haven't been fought over soccer matches, right?

You see, the problem with Neocon doctrine--well, aside from it being strategically inept, morally dubious, and atrociously managed--is that it proposes spreading democracy by force through some of the world's worst regions.  Why the hell can't we fight a war in a nation with one of the highest GDPs per capita? Ghost of Leo Strauss, I'm looking at you.
Thus, I propose Tweeting ourselves into power in Liechtenstein.  We'll put Primoris Era on the throne, too.  (Her ancestors were part of the Russian royal family, so it's a good way for us Yanks to get back at the Bolsheviks.)
Anyone wishing to join me can be a high-ranking official in my new government, all for the price of being my crony.  Hey, we pay Hamid Karzai to do worse, right?
Posted 15:23

Can i be Ministress of the Interior/Inland Security Ministry?

We had you down as Luftwaffe Minister, Fraulein Messerschmidt...

Can I run the Weather Office and have a new laptop?

Ooh, ooh! I want to be cyber-security czar!

Hi, Some one from facebook refereed your link i have book marked it nice blogs you write see Free  how to grow twitter followers here

Its very informative and interesting article.all the points are very useful. Simple but very effective writing. Thanks for sharing such a nice post.