Most Influential Man Ever 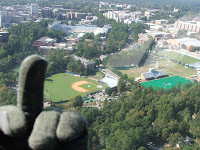 There have been many people of influence throughout history: Ghandi, Martin Luther King, you get the picture.

But there is one very unsung influential man in history: Scott Altman, commander of the current Space Shuttle mission, and former Naval Aviator who had a key role in the movie Top Gun.

The retired Navy F-14 fighter pilot is the commander of the current space shuttle Atlantis mission to repair and upgrade the Hubble Space Telescope. He also doubled for the actors, including Cruise, during the Southern California shoot of the 1986 hit movie.

Then a young pilot, Altman had just gotten back from a 7½-month tour onboard an aircraft carrier when he got the "Top Gun" call from his commanding officer.

"The skipper of our squadron picked four guys he thought he could trust to have this kind of carte blanche to break the rules a little bit," Altman said. That included a scene in which a brazen Navy pilot buzzes the base's control tower. That would never happen in real life, Altman said.

Altman is not one to brag about his flying in "Top Gun." The U.S. space agency, NASA, doesn't mention his film heroics, either. But Altman is in one of the movie's most memorable scenes. While flying upside down, inverted, Altman gives an obscene gesture to the pilot of an enemy plane.