The most bizarre items in the Post Exchange in Iraq

Every journalist (or wannabe journalist) has their "slow news day" story that they keep in their back pocket, ready to publish when they can't think of anything else to write about. Today, I'm dipping in to that "tactical reserve", so to speak. I'm going to lampoon the bizarre collection of items available for sale at the PX, and the dearth of items that, you know, I might actually need.
Former US Navy SEAL Dick Marcinko has a little glossary in the back of many of his books to define certain phrases he and his SEAL buddies use all the time. When I was in high school, a few friends of mine took great pleasure in using many of these terms--usually filled with all sorts of colorful expletives--in general conversation all the time.
One term he uses bears special recognition--the term "wannabe". Marcinko uses it to describe many faux SEALs who buy all sorts of tactical equipment and walk about as if they are, in fact, SEALs. The military surplus stores and, of course, the Internet, are filled with expensive tactical gadgets which are just designed to rip you off. Many of these products have migrated to your local post exchange. Observe: 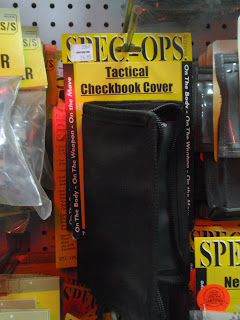 Yes, for the low, low price of $26.95 USD, you too can have your very own "tactical checkbook". (This sounds like it has almost as much value as the vaunted M5 Tactical Segway which was actually being touted on Small Wars Journal one time). I like how the tag-line on the packaging says "on the body--on the weapon--on the move", as if Special Operations Soldiers are going to be mounting their checkbook covers to their M4s.
I'm not certain what's so "tactical" about it, as it's actually just a checkbook cover made of black vinyl. I'm not sure why one would even need a tactical checkbook cover in the first place. I rarely even write checks back in the US, and I certainly don't need to use checks in Iraq. Maybe it might come in handy in the following scenario.

Soldier: Sir, the Iraqi insurgents are attacking us!
NCO: Never fear, take a look at this!
Soldier: I didn't even notice you had that tactical checkbook! It blends in so well.
NCO: With this check, I will turn these insurgents into the Sons of Iraq! Ta-da!

Eh, maybe not. At any rate, "tactical checkbooks" are part of what we like to refer to as the

"black velcro"phenomenon. That is to say that any Soldier will look that much more elite with the proper application of black velcro items all over his uniform--and he will spend top dollar to do so. See the attached picture of the "Geardo" from Bob on the FOB for more information. (Correlary to these archetypes is the following rule: the more obnoxious, unwieldly, ACU patterned, and the more magazine pouches and lanyards you place on your holster, the less likely you are to actually need your pistol in combat. Seriously, just get a paddle holster for on-the-FOB use and a chest rig for your body armour.)
Moving along. I would also like to note that it's quite difficult to get many of the things that I actually need in Iraq at the Post Exchange--things like shoelaces, captains' rank, unit patches, et cetera. Instead, we get the following. Check out the rank insignia in the picture: 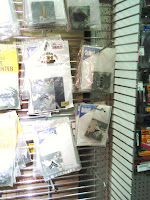 You'll need to click on the picture to fully appreciate this, but note that there's no sergeant insignia, no captain insignia...but (at the bottom right), there's brigadier general insignia. I always wonder if the PX understands the bell curve. There's never a shortage of extra-small, extra-large or extra-high-rank insignia, but there's never anything in stock for those of us who are medium-regular captains or sergeants.
Although I can't get shoelaces or rank insignia at the PX, here's what I can get: 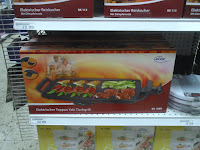 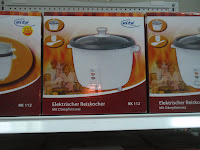 Just what I always needed! A hibachi grill and a rice cooker (at least that's what I think the German says)! That's perfect for those of us who aren't allowed to grill food inside our quarters due to the fire prevention regulations!
Christ, I need to go home to the US just to do some real shopping.
Posted 07:47

Regarding rank insignia, it could be simple supply and demand with the more common ranks perpetually sold out (and not restocked in a timely manner thanks to the miracle of PX logistics) and the only ones left are the weird leftovers. Kind of like when clothes go on sale and you're left with bizarre sizes or a food item goes on sale and all that's left are the really strange flavors.

You're right, it usually is a supply/demand issue. Although this is actually kind of an ongoing issue in any military supply system--they never seem to order enough "medium" anything--rank insignia, uniforms, body armour, etc.

Sergeants and captains...what good are they anyway?
The USCavalry store beats the PX any day.
I like the spiffy new look to the blog. You're not fishing for a book deal, are you? haha

That reminds me of being on an FTX when I was wet behind the ears. My team leader, seeing non-issue stuff, takes me aside and asks "How much does 10 pounds of cool stuff weigh?"

Of course, he had a bit more color in it.

The Thunder Run has linked to this post in the blog post From the Front: 10/06/2009 News and Personal dispatches from the front and the home front.