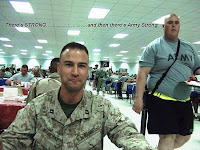 Tom Ricks linked to a great article on CompanyCommand.com (only available to those with an AKO address, sorry) which listed eight lessons to learn before going to Afghanistan.
The number one lesson that almost every commander listed was the importance of physical conditioning. Even the most well-conditioned troops get fatigued while patrolling in the thin mountain air of Afghanistan on foot, laden with heavy body armor, helmets, ammunition, water, radios, and night-vision devices.
Unfortunately, although the fitness standards are still the same as they have been for the past ten years, they're considerably less strictly enforced now, in an attempt to keep more troops in uniform. Soldiers graduating from Basic Training are no longer required to pass their physical
fitness test (which consists of two minutes of push-ups, two minutes of sit-ups and a two-mile run). Instead, they are told that, upon graduation, they have a year to pass their physical fitness test, placing the burden of conditioning them on their first unit.
If a Soldier can't get in shape with a drill sergeant hovering over him--making him do push-ups and monitoring his diet strictly--it will be that much more difficult to get him into proper shape in the relative freedom of their first unit, when they can eat whatever they want at the dining facility, and have weekends to play World of Warcraft non-stop.
This doesn't mean that it's impossible to get a Soldier in shape--certainly, I met quite a few who worked diligently and passed their physical fitness test upon arrival in my company. But it's that much more difficult to do so. Not to mention that it's become that much more difficult to chapter overweight or unfit troops out of the Army once they're in (see picture above).
With that said, since we're basically forced to go to war with the Army we have, and not the one we wish we had, we need some new ways to get Soldiers used to the conditions in Afghanistan. One of the best training events I ever took part in involved some winter survival training in the mountains near Lake Placid, New York. You know, we're the 10th Mountain Division, so we had to do something, well, mountain-like.
Anyway, the training event involved climbing up one of the mountains in the area (was it Whiteface Mountain?). Not only did we have to deal with the thin mountain air--a mere increase in altitude of 3,000 feet will sap one's stamina like you wouldn't believe--but we also
had to learn how to properly layer our clothes so we wouldn't overheat,
sweat, and get our winter clothing wet, leading to further cold- 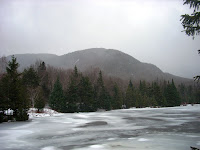 weather injuries. On the way down the mountain, we used our survival GPS to navigate, just like we would do if we were shot down. (I'd be remiss if I didn't mention that I also slipped and slid pretty much all over the face of the mountain. But hey, it made for a quick trip back down, so suck it)
It was quite a fun training event, and it was excellent conditioning for the mountains of Afghanistan. I highly recommend this to anyone going there. Apparently, we aviators in the North Country weren't the only ones doing this sort of training--a number of tankers at Fort Stewart, Georgia, found out that they would be fighting as dismounted infantry in Afghanistan and began to condition themselves in the Appalachians.
Focus: What other exercise programs would you suggest for Afghanistan?

Your descriptions on preparations for Afghanistan remind me of the preparations that my Boy Scout troop's contingent to Philmont did prior to going out for our merry little hike in the mountains of New Mexico where the altitude went from 6k to 12k ft.

I remember that they would have us load up our packs with about 40 pounds worth of weights and do some practice walks through our neighborhoods and whatnot to get used to carrying that sort of gear. Doing this in the spring and summer in North Carolina certainly builds character. We also did backpacking in the Smokey's near Mt. Mitchell to practice.

All the stuff about layering and whatnot; it sounds like the Army just needs to issue a Scout Manual to each of its soldiers prior to deployment.

Here's one routine that was recommended by the Scouts. If it works for lazy high school kids, it hopefully will work for the Army.

Another thing to keep in mind (about the layering thing, in particular) is that most Army bases are in the South, so most Soldiers are used to warm climates and flat land.

The Thunder Run has linked to this post in the blog post From the Front: 10/27/2009 News and Personal dispatches from the front and the home front.

I phoned the local Army recruiter and asked whether recruits who can't pass the Army Physical Fitness Test are given a one-year extension to pass it at Advanced Individual Training or at their first unit. He said he wasn't aware of any such policy. Possibly this was a temporary exception to policy that was put into place as an expedient when recruiting problems were at their height a few years ago, and since then has been rescinded. A personnel guy may have the answer to this question.

The first I heard about this actually came through an odd (but credible) source. A few months after command, some office in the Army (maybe the Vice Chief of Staff?) sent out a survey for all captains to fill out regarding the strengths and weaknesses of Soldiers coming out of basic training and AIT. One of the questions was, "Were you aware that Soldiers have one year after AIT to pass their APFT?". I didn't know that at all. If the Army was putting it out in a survey, there had to be some credibility in it, although I'm not certain if it was temporary, or where the regulation was regarding it.

Thanks for getting back to me regarding current policy on the APFT. In response to Tom Ricks' recent blog entry on the relief of senior Army officers, I posted a message (using my name Pete) on the time I was relieved for cause from company command 26 years ago. I enjoy reading your blog.