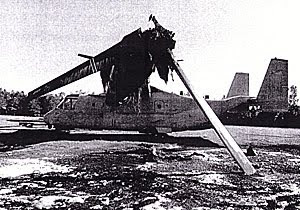 The V-22 Osprey always brings up heated emotions from both its supporters and detractors. There are those that love it, claiming it's the herald of a new era of aviation. There are others who despise it, claiming it's little more than a multi-billion dollar death trap.
There's also a lot of misinformation spread by both camps, owing to the fact that each faction has elements within it with a financial incentive to either promote or derail the V-22 (just take a look at the comments in this particularly vicious thread at Tom Ricks' blog).
However, there are still quite a few credible independent sources out there, one of which is the US Naval Institute's blog, which called into question the V-22 Osprey's safety record. Foremost among the issues cited is the fact that the US Navy Safety Center claims that the V-22 has had no Class A accidents (one which causes over $1 million in damage or loss of life) since 2001, despite the fact that a Congressional service report found at least two such accidents since 2006, including an engine fire which resulted in $16 million in damages.
Now, there's a million ways to manipulate statistics, and I suspect that safety records can be no different. If anyone with more experience in V-22 Osprey safety reads this blog, I'd gladly appreciate their feedback.
The V-22--a hybrid between a helicopter and airplane--is one of those ideas like the battlecruiser. Sure, a hybrid solution looks great on paper, but the truth of the matter is, it tries to combine the strengths of each platform, but it winds up incorporating a lot of the drawbacks as well.
The V-22 has been performing "ring route" missions in Iraq relatively well--it can hit more locations in a day than a conventional helicopter, and can land at remote outposts. I wouldn't claim that it's a piece of junk. Nevertheless, was that capability really worth all the billions of dollars we put into it? Couldn't the Marines have gotten, maybe, a mix of several Chinook helicopters and fixed-wing aircraft?
Photo from USNI's blog.

The V-22 was a test bed for many cutting edge technologies; Fly-by-Wire verticle lift flight controls, composite airframe and dynamic components and high pressure hydraulic systems. It is these technologies that caused almost all of the Osprey's reported issues. Tiltrotor technology was proven out on thousands of XV-15 flight tests. Had the tiltrotor concept never occured, these cutting edge technologies would have caused similar problems on conventional helicopter designs.