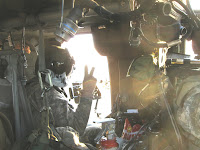 Helicopters in Afghanistan will soon be equipped with a system which detects incoming bullets, warning the crew, and giving them the chance to evade.
And if it weren't for Nathan Hodge at Wired's Danger Room, I wouldn't have known this thing even existed...
Posted 21:32

The system listed in the article tends to a be a DARPA pie-in-the-sky thing, but you can be sure that several Army Acquisition organizations are digging into an interim solution for next year, with longer-term plans. Obviously I won'y spilling the beans on who or what typoes of technology.

And all of this is a GOOD THING. Alas, we should have started doing after the Battle of Mogadishu (Oct 93), after Kosovo, after the Battle of Karbala Gap (2003, dozens of AH-64Ds shot up). But as with many of our changes these days, it has taken a full-on shooting match to gain the momentum (and funding) to do it.