Wired.com ran an article today discussing the US Army's monitoring of the blogosphere. This is interesting; the Army hires MPRI, a private contractor, to monitor the top military-related blogs and report on the "slant" of each article: balanced, critical, or supportive. Although I'm not too surprised that the Army rolls up and analyzes military blogs, I am surprised that PowerPoint metrics made their way into the rollup.
First of all, I'd like to say that Effects-Based Operations are dead.
Long live Effects-Based Operations.
Yes, just when you think that the military killed off EBO and its terminology, "Lines of Effort" once again made their way back into the common lexicon. Like much of EBO doctrine, LoE is one of those buzz-words we haphazardly apply with no real appreciation for its real definition (see the commentary on EBO buzzwords from the 2006 Lebanon war). Lines of Effort move towards some sort of defined end-state. Is there an end-state for media operations? Not to mention, the LoE the study group chose are baffling. Let's take a look at them: 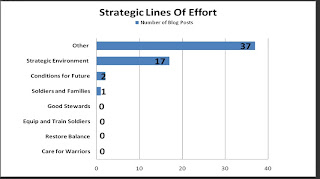 We might need to look at our metrics again if "other" dominates 2/3 of the chart. (Are they really "strategic lines of effort") Then again, the report is in its infancy, and they're probably still learning what exactly we want to know about the blogosphere. In that case, it's forgivable.
I do find the "hot topics" graph amusing, though: 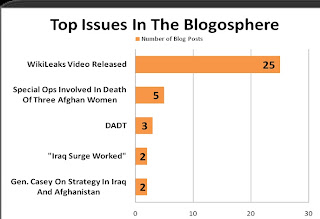 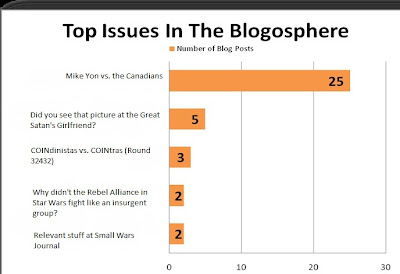 However, they do (surprisingly) provide some thoughtful analysis of the current state of the milblogosphere. Many of the metrics they use should be refined over time. As they get to know the milblogosphere, they'll also start finding articles from the smaller milblogs as well--Kings of War, Ink Spots, you name it.
Yet, I still think that Karaka Pend and Dave Dilegge, after reflecting upon the study, came up with the best observation ever:
Karaka Pend: I wonder if the analysis of their analysis on [Danger Room] and [Small Wars Journal] and so forth will show up in next week's "Other LoE"? That would be meta to the max.
Dave Dilegge: Hmm, interesting thought, if enough blogs pick up on it - or at least the ones they follow - how could they not?
Thoughts?
Posted 20:17

Mike Yon vs. the Canadians sounds like a hipster band. Or a Japanese game show.

I'm really upset at this, but I guess the military has a right to found out what's being said. I hope critical doesn't turn into toeing the line.

I'd like to think I'm critical in the hopes of making the military better. Hmm, after the Soldier's Perspective thing, can't say I'm not worried.