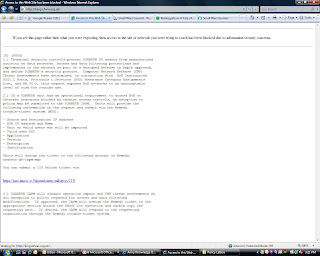 Kings of War, a magnificent blog from the gang at Kings College London, focuses on all sorts of issues regarding defense policy, grand strategy, and, well, other critical matters.  Nevertheless, I recently discovered that it's been banned by US Army Europe.

Look, I know the British burned down the White House, but really, that was nearly two hundred years ago.  Give it a rest.

Fortunately, Facebook and Great Satan's Girlfriend are still okay, according to the USAREUR firewall.  Not to mention, Google Reader is a simple workaround to issues such as these.

(Ed. Note:  If you look at the Windows toolbar, you'll see that I have six PowerPoint presentations open at once.  FML.)

Based on my research it looks like the servers which are hosting Kings of War are also hosting some High Risk sites.

The Kings of War domain itself is Uncategorized according to one of the web filtering provider used by the DoD (Navy, Marines, Air Force, not sure if the army uses the same stuff though). This means that the web filters will attempt to categorize the site based on IP address. Since IP address can be used to host multiple sites and Kings of War is being hosted on the same IP as:
ns.faihin.org
ns1.barbiesbailbonds.com
ns1.faihin.org
ns2.barbiesbailbonds.com
ywchangwang.cn
and the IP(173.201.97.128) comes up with a HIgh Risk web reputation and a category of Malicious Sites, It is being blocked.


So my strong suspicion is that this is not being targeted at Kings of War. It is just that the web host kings of war is using is or has been hosting some pretty sketch sites at the same IP address.

This is kind of a baby with the bathwater situation but given that this baby just isn't that important and the bathwater stinks so bad it is probably the right call.

You could always try and get the Army to get their web filtering provider to categorize Kings of War which might get you around this problem, but my guess is this isn't high on their list of priorities so Google reader is probably your best bet if its not blocked.

Also this is entirely speculation on my part as I have zero first hand experience or knowledge of the actual web filtering systems and setup being used by the Army.

Wow, 161 in Google Reader. Just been awhile or you have an enormous amount of subscriptions? Either way, I'd love to see what you subscribe to so I could get some good recommendations.

Yeah, I have a lot of feeds in my RSS reader. If you're curious as to what I read, most of them appear in the blogroll on the right hand side of the screen.