China's new J-20 "Black Dragon" has kicked the fear-industrial complex into afterburner.  Yet, the hype surrounding the PRC's new 5th Generation stealth fighter should give pause to aviation enthusiasts who have been paying attention to high-profile Russian prototype fighters of the last two decades.

We'll call these amazing prototypes "wunderwaffen", just as the Third Reich did during its final days.  Although certainly impressive, wunderwaffen often fall short in the pragmatic conditions of modern conflict, and are often too expensive to produce in large numbers.  Thus, the term is perfectly applicable to the latest batch of Russian jet fighter prototypes.  Since the end of the Cold War, the same Russia which can barely keep its submarines afloat, fields a paltry five combat-ready battalions, and whose military has one-sixth the budget of the US Department of Defense, often touts the potential of such fantastic wunderwaffen, only to see them peter out in final production.

But that certainly doesn't stop the Internet fanboys for singing their praises.  Come, let's take a look at the Rogue's Gallery:
The Su-47 "Berkut"
The Su-47, first flown in 1997, incorporates a revolutionary forward-swept wing (FSW) design.  Well, revolutionary for everyone except Nazi engineers from end of the War.
And, of course, for DARPA engineers about a decade and a half prior.
As it turns out, the United States experimented with forward-swept wing technology in the early 1980s with the Grumman X-29, having been inspired by Nazi Germany's Ju-287 plans.  Though the X-29 proved to be a remarkable aircraft, capable of angles of attack measuring 67 degrees, the development of thrust-vectoring and reliable medium-range air-to-air missiles largely turned the fighter community away from FSW aircraft.  (Though commercial gliders do, however, incorporate FSW designs)
But don't tell that to the Internet fanboys.  While Sukhoi has only built one Su-47, Internet fandom would have one believe that the fighter is in full production, and, despite no stealthy features, a match for the F-22.  Don't believe me?  Let's take at that most reliable of sources, Youtube comments:

I noticed USA planes resemble the russian ones. And btw, what usa plane does this resemble? You americans are so egoistic and brainwashed that you cant﻿ admit someone has more or equaly advanced tech as you do.

There you have it. However, the internet jackassery pales in comparison to Russia's newest top-of-the-line fighter, the Su-35.
The Su-35 "Flanker-E" 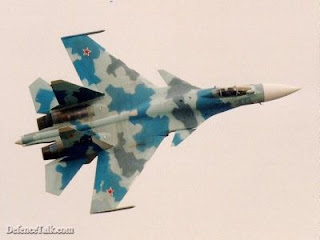 The Sukhoi Su-35 Flanker-E, a heavily-upgraded Su-27, first entered service with the Russian Air Force within the past decade.  The Su-35 is characterized as a 4.5-Generation stealth fighter, a half-generation behind the US Air Force's F-22.  More importantly, despite being the best fighter jet Mother Russia has to offer, it only numbers about 15 strong, compared with over ten times as many F-22s in the US Air Force, with many more stealthy F-35s on the way.
It's worth noting that the cost and complexity of modern fighter aircraft might preclude China from fielding its new J-20 in large enough numbers to compete with the US Air Force.  Of course, don't let such logic detract from the Internet fanboys:
Yeah.. but sukoi has another plane that owns the F-22 in thrust vectoring.. its called the﻿ SU-37.. also can track a stealth aircraft from 60 kilometers away and non stealthed aircraft from 4000KM away.
Yes, that's right, XTREME! over-the-horizon radar capabilities.
So let's keep the recent history of Russian wunderwaffen in mind when we discuss the J-20.  Cause for alarm?  Maybe.  I know that won't satisfy those who earn their living in the fear-industrial complex, but it's the best advice for dealing with China's new 5th-Generation fighter.
Posted 16:44

Out of curiosity.. Do you happen to know about the advantages/disadvantages of the FSW? Aside from those you mentioned.