Link of the morning is here...

An excerpt from Zenpundit:

There has been, for years, an ongoing debate in the defense and national security community over the proper place of COIN doctrine in the repertoire of the United States military and in our national strategy. While a sizable number of serious scholars, strategists,

journalists and officers have been deeply involved, the bitter discussion characterized as “COINdinista vs. Big War crowd” debate is epitomized by theexchanges between two antagonists, both lieutenant colonels with PhD’s, John Nagl, a leading figure behind the U.S. Army/Marine Corps Counterinsurgency Field Manual and now president of the powerhouse think tank CNAS , and Gian Gentile, professor of history at West Point and COIN’s most infamous arch-critic.

In terms of policy and influence, the COINdinistas ultimately carried the day. COIN advocates moved from a marginalized mafia of military intellectuals who in 2004 were just trying to get a hearing from an indifferent Rumsfeld Pentagon, to policy conquerors as the public’s perceptions of the ”Surge” in Iraq (masterminded by General David Petraeus, Dr. Frederick Kagan, General Jack Keane and a small number of collaborators) allowed the evolution of a COIN-centric, operationally oriented, ”Kilcullen Doctrine” to emerge across two very different administrations. Critics like Colonel Gentile and Andrew Bacevich began to warn, along with dovish liberal pundits - and with some exaggeration - that COIN theory was acheiving a “cult” status that was usurping the time, money, talent and attention that the military should be devoting to traditional near peer rival threats. And furthermore, ominously, COIN fixation was threatening to cause the U.S. political class (especially Democrats) to be inclined to embark upon a host of half-baked, interventionist “crusades“in Third world quagmires.

Informed readers who follow defense community issues knew that many COIN expert-advocates such as Nagl, Col. David Kilcullen, Andrew Exum and others had painstakingly framed the future application of COIN by the United States in both minimalist and “population-centric” terms, averse to all but the most restrictive uses of “hard” counterterrorism tactics like the use of predator drones for the ”targeted assassinations” of al Qaida figures hiding in Pakistan.

Unfortunately for the COINdinistas, as George Kennan discovered to his dismay, to father a doctrine does not mean that you can control how others interpret and make use of it. As the new Obama administration and its new commander in Afghanistan, General Stanley McChrystal conducted its internally contentious review of “AfPak” policy in 2009 on what seemed a geological time scale, the administration’s most restless foreign policy bigwig,the Talleyrand of Dayton, proposed using COIN as nation-building on steroids to re-create Hamid Karzai’s Afghanistan as the secure, centralized, state that it has never been. Public reaction to this trial balloon was poor and the administration ultimately pared down General McChrystal’s troop request to 30,000 men, hedging a COIN based strategy toward policy suggestions made by Vice-President Biden....

...COIN is an excellent operational tool, brought back by John Nagl & co. from the dark oblivion that Big Army partisans consigned it to cover up their own strategic failures in Vietnam. As good as COIN is though, it is not something akin to magic with which to work policy miracles or to substitute for America not having a cohesive and realistic grand strategy. Remaking Afghanistan into France or Japan on the Hindu Kush is beyond the scope of what COIN can accomplish. Or any policy. Or any president. Never mind Obama, Superman, Winston Churchilland Abe Lincoln rolled into one could not make that happen.

Association with grandiosely maximalist goals would only serve to politically discredit COIN when the benchmarks to paradise ultimately proved unreachable. Austerity will scale them back to the bounds of reality and perhaps a more modest, decentralized, emphasis. COIN will then become a normal component of military capabilities and training instead of alternating between pariah and rock star status inside the DoD.

Great article, but minus one point for not using the following Nagl/Gentile mashup: 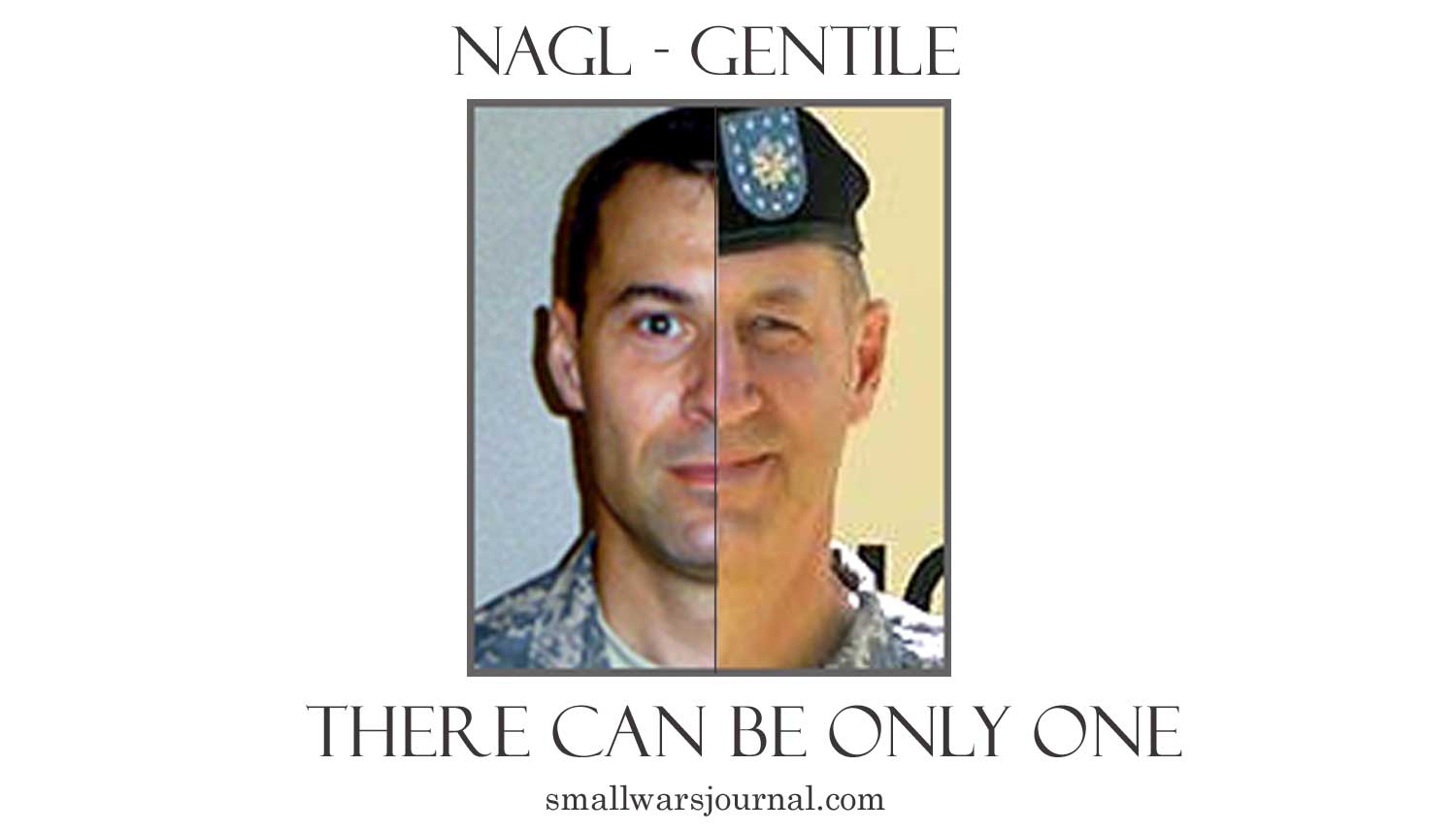 (Just kidding, there can be a bit of both in US military policy)