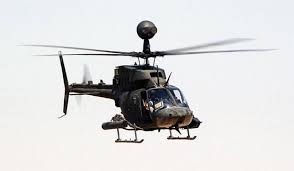 I had a great conversation the other day with a senior aviator that brought up some interesting observations on piracy. I was going to post this last night, but an unexpected sandstorm knocked out my Internet.

One of those aviation clichés that actually is true is that in every unit, there's that pilot that's been around forever. He's flown one of everything in the Army's inventory, in every theater, and blown up one of everything the enemy's had. Yesterday, I talked tactics with just one such aviator.

We noted that Somalia isn't the first time the US has had to deal with pirate-like enemies in the recent past. In the 1980s, the US and Iran were engaged in the largest naval battle since the Second World War in what has been termed "The Tanker War". During the Iran-Iraq war, Iran had captured a number of Iraqi and Kuwaiti oil tankers, causing the US Navy to take action in the conflict

Thus began a massive campaign against the Iranian Navy. Much to the surprise of the US Navy, which was trained to win massive shooting wars against the Soviet battle fleet in the Northern Atlantic to protect the Greenland-Iceland-UK Gap, the Iranians employed speedboats against American warships.

The US Navy augmented itself with aircraft from, of all places, the US Army--specifically, aircraft from the 160th Special Operations Aviation regiment, which operated its "Little Bird" AH-6 and MH-6 aircraft some thirty feet off the water as part of Operation Prime Chance. It was the first time Army Aviators flew with night vision goggles in combat.

The US Army also rushed the new OH-58D Kiowa Warrior into production, which served in Task Force 118 during the brief conflict. The smaller helicopters, working in conjunction with US Navy ships, were able to seek out and destroy Iranian speedboats, and assisted in the capture of the Iranian mine-laying ship, the Iran Ajr.

The primary mission of the US Navy is to ensure freedom of the seas and to protect US shipping interests. The latest round of piracy in Somalia shows us once again that $2 billion submarines such as the USS Seawolf, F-22 Raptor fighters, and "stealth" destroyers such as the new DDG-1000 are not of great use when your enemy is a group of teenagers who deploy by speedboat and hold American citizens hostage in bright orange life boats. A greater reliance on intelligence, surveillance and reconnaissance assets, coupled with small-boat and rotary-wing capabilities to transport Special Operations Forces (particularly SEALs) is one of the best ways to combat piracy.