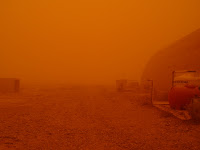 Sandstorms have been known to put entire wars on hold for a few days--just look at the brief halt in the Coalition blitzkrieg in 2003.

With that said, I have not only had the opportunity to update the blogroll on the side of the page, but also check out some great new articles. Looks like John Robb of Global Guerrillas has the best articles of the morning regarding the latest developments in Afghanistan and Pakistan.

John Robb's first article links to a story in the Wall Street Journal which describes the opening phases of the Afghan troop surge, noting that the population-centric security strategy has allowed legitimate politicians and other government officials to resume their normal duties. The article notes that NATO troops are increasingly being pushed off of the massive super-bases in Afghanistan, taking up positions in small outposts near the cities.

Last year, it took a 150-man police escort to get Sayed Jawad Bahoner, the new subgovernor of this district, safely into Jalrez town to assume his post. He slept on the floor of his office building and rarely ventured more than 100 yards outside for fear of the insurgents who ruled the streets.

That was before February, when a company of American infantrymen dropped into town from helicopters and set up outposts along the Jalrez Valley. Mr. Bahoner feels so safe that in April, he summoned his wife and three children from their hideaway in Kabul and moved them into a house in town...

...U.S. officers here believe the surge forces will provide enough troops to pursue aggressive counterinsurgency tactics in the country's most volatile areas. That means not only clearing contested villages and valleys, but also leaving troops in place to keep insurgents at bay. Previously, U.S. troops left swaths of the country untouched and would fight their way in to others, but couldn't stay long enough to prevent the Taliban and other insurgent groups from returning.

The goal is to buy time for the Afghan government to provide safety and services to the locals, solidifying its legitimacy. "The surge in Iraq created space to develop the Iraqi security forces," said Col. Haight. "It's the same thing here."...

...In February, the 180 men of the battalion's Alpha Company jumped out of hovering helicopters into thigh-deep snow near Mr. Bahoner's district building. They pressed east through the valley, eventually setting up three permanent outposts.

They met virtually no resistance. Since the soldiers arrived, insurgents have twice fired rockets and once taken potshots at them. The troops have encountered just two roadside bombs.

"It's such a shock to see so many U.S. troops here that whatever plans [the insurgents] had are on hold," says Capt. Matthew Thom, a 31-year-old from Beaverton, Ore., and Alpha Company's commander at the time of the air assault.

The outposts are rudimentary. The troops eat either packaged meals or heated trays of school-cafeteria-style dishes. Most days are quiet: Soldiers chat on foot with the locals or drive from village to village in Humvees and armored vehicles.

Taking advantage of the calm, construction crews funded by the Italian government are preparing to pave the valley's pitted dirt road. Afghan and U.S. officials hope this will allow locals to more easily send apples to market in Kabul or Pakistan, and remind them that their interests lie with the government.

Which is great news for Afghanistan. The unfortunate issue is that "Surge Operations" are only part of the solution. John Robb is quick to point out that many of the gains in Iraq were also made by also incorporating the Iraqi people--most notably the Sons of Iraq--into the security situation, turning against al Qaeda and other groups. Afghanistan, he notes, has not demonstrated that ability just yet. And with the large number of fractured tribal groups, an "Awakening" probably isn't likely to be as successful, if it even happens at all.

John Robb also takes a look at an issue that Andrew Exum of Abu Muqawama and David Kilcullen have also looked at this week--namely, the dubious nature of the alliance we have with the Pakistani military in the fight against the Taliban and al Qaeda. (Includes a story from The Washington Post)

Bonus: The Wall Street Journal article even credits my Sackets Harbor drinking friends from the 3rd Brigade Combat Team of the 10th Mountain Division who were given last-minute orders to divert from Iraq to Afghanistan. These Soldiers deployed from Upstate NY in the middle of winter, where there is approximately three feet of snow on the ground, and arrived in Afghanistan in the middle of winter where there's, well, also three feet of snow on the ground. I'd like to give a shout-out to these Soldiers; unfortunately, shots of Jaegermeister I drank with them killed the brain cells which held their names, so I can't credit them individually.