It's safe to say that most aviation enthusiasts enjoy reading about prototype aircraft that never made it to production. "X-planes", as they're often called, capture the imagination, and include such incredible examples as the XB-70 Valkyrie bomber, the AH-56 Cheyenne helicopter, and the YF-23 Black Widow. While most of these aircraft are painstakingly maintained at museums throughout the world, a few notable prototypes of remarkable aircraft lay battered, broken, and bake in the sun in remote locations.
When I was a lieutenant in flight school in Fort Rucker, Alabama; I drove through the Daleville gate for the first time. I looked to the left, and I saw Fort Rucker's famous Army Aviation Museum, which featured the prototype AH-56 Cheyenne, a CH-54 Tarhe ("Skycrane"), and an OV-1C Mowhawk parked outside. As I made another left turn, however, I noticed that the museum had a back lot, filled with experimental, one-of-a-kind aircraft, just rotting in the sun. There was the XCH-62 Heavy Lift Helicopter, capable of picking up a tank, as well as the Boeing Model 347, the first fly-by-wire helicopter, based on the CH-47 Chinook.
But one of the best finds came when someone told me about the YAH-63 prototype--the aircraft which competed against the AH-64 Apache--located near a golf course at Fort Rucker (Google Maps). After some investigating, I determined that it was located just outside of plain sight, behind a fence. It had simply been abandoned and neglected for years, its remains rotting in the heat and humidity of southern Alabama. 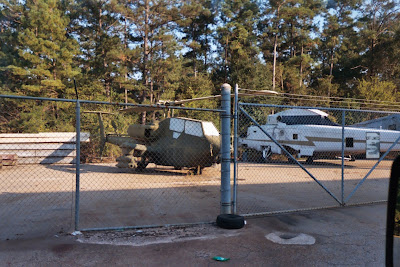 Yes, a prototype attack helicopter in all its glory. Interestingly enough, I have no idea what that plane next to the YAH-63 is either...it almost looks like the cockpit and fuselage of an X-wing starfighter. Anyone care to venture a guess?
The Russians are no different, with one of their most incredible designs rotting away on the shores of the Caspian Sea. It's a "ground effect vehicle"--a half-ship, half-airplane hybrid--that could travel the seas at over 300 miles per hour. The Russians called these types of ships "ekranoplans". Developed in the 1960s, these strange vehicles were spotted by American spy satellites and dubbed "Caspian Sea Monsters". The most impressive of the Caspian Sea Monsters was the 500-ton KM-08 Ekranoplan, the heaviest craft ever flown. Another interesting craft is the Soviet Lun-class ekranoplan, which was armed with missiles and served as part of the Soviet Black Sea Fleet during the late 1980s.
Today, the Lun-class ekranoplan sits in a state of disarray, rusting away along with much of the former Soviet fleet. Check out the Lun today in an impressive blog entry (it's in Russian, but the pics speak for themselves). Thanks for the pictures! I enjoy your blog.

I thought the army aviation museum was Fort Rucker... is it just too overcrowded to put it in a hangar?

Fort Rucker has much more than just the museum. It contains almost every training program available for Army aviators--the flight school, the officer training programs, you name it.

It's quite a big complex, with "Fort Rucker" actually owning a number of small remote sites for aviation training throughout Alabama and Florida.

As for why they don't hangar these things, I'm not certain. I believe that Rucker still has a Hind-D in its possession, but I don't know where they keep it.