I can guarantee this costs less than $2 billion 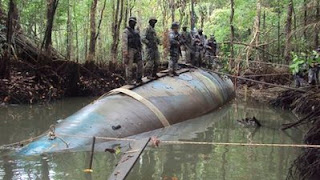 A 100-foot (33-meter), twin-screw diesel submarine seized at a jungle shipyard in Ecuador marks a quantum, if anticipated, leap in drug-smuggling evasion technology, the top U.S. counter-drug official for the region said Sunday.

"It is the first fully functional, completely submersible submarine for transoceanic voyages that we have ever found," Jay Bergman, Andean regional director for the Drug Enforcement Administration, told The Associated Press.

Equipped with air intake and engine exhaust pipes, none of those craft were capable of fully submerging so they could evade radar and heat-seeking technology of drug-interdiction aircraft.

Acting on a DEA tip, the Ecuadoreans found it at a sophisticated shipyard with living quarters for at least 50 people on a jungle estuary several miles from the Colombian border, he said. It had yet to make a voyage.

Built of fiberglass and other composites, it has a conning tower, periscope and air conditioning system and measures about 9 feet (2.7 meters) high from the deck plates to the ceiling, the DEA said. Ecuadorean police told the DEA the vessel has the capacity for about 10 metric tons of cargo, a crew of five or six people and the ability to fully submerge, Bergman said.

How many torpedo tubes does it have? Oh, zero? not exactly a "hybrid" capability then.

It's a smuggling platform, not a military capability. Don't confuse the Millenium Falcon with an X-wing.