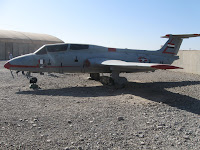 Those of us who have been stationed in the "aviation section" of Contingency Operating Base Speicher are quite familiar with the L-29 Delfin jet which sat right outside the dining facility. Jets of this type were made in Czechoslovakia during the 1960s, and were used as trainers in air forces throughout the Warsaw Pact, as well as in Soviet client states in the Middle East, to include Iraq.
After the US invasion in 2003, American forces captured the Iraqi Air Force's flight school at al-Sahra Airfield (now called COB Speicher), north of Tikrit. A few years later (roughly 2007), Soldiers from B Company, 209th Aviation Support Battalion--an aviation maintenance company--discovered the remains of four L-29 jets in various states of disrepair. The men and women of this organization worked diligently to refurbish one of the aircraft, which served as a display outside the aviation brigade dining facility.
Two years later, the men and women of the 209th Aviation Support Battalion--known as the "Lobos"--are back at COB Speicher, only this time, the Iraqi security forces--to include their Air Force--are preparing to take the lead in combat operations. As such, the Iraqis are gradually re-establishing their flight school at al-Sahra Airfield. To commemorate the transition from US-led operations to Iraqi-led operations, the men and women of the 209th ASB have donated the L-29 jet to the Iraqi Air Force. This press release from the Hawaii-based 25th Combat Aviation Brigade--the 209th's higher headquarters--has the story.
(As an added note, I had the honor of being replaced in Iraq by the men and women of the 209th ASB, and found them to be a great organization. Excellent work!)
(H/T US Army Stand-to from Monday)

The plane will serve as a static display at COB Speicher, outside of Tikrit, Iraq. The dedication occurred in conjunction with a ceremony marking the return and re-opening of the Iraqi Air Force College to its original location.

The L-29 Delfin originated in Czechoslovakia in 1959 and was powered by a Bristol Siddeley Viper turbo-jet engine. It was designed as a straightforward, rugged and easy to fly jet. The aircraft were sold to Iraq between the late 1960s and early 1980s and were used primarily as jet trainers and advanced combat flight trainers.

"During this unit's last rotation to Iraq in 2007 and 2008, Soldiers from Bravo Company located four L-29s in various stages of ... disrepair," Bentley said. "Over a process of weeks and months, from those four planes, they pieced together a complete aircraft [without the engine and avionics] and displayed it in front of one of the dining facilities here.

"The Delfin is a unique part of Iraq's military history," he added. "Upon learning that the Iraqi Air Force College was being re-opened here, we thought it fitting to dedicate it to them. Now it's a centerpiece of this location and hopefully serves to highlight the partnership between the United States, and Iraq's military and its citizens."

"It's the Soldiers that made this project happen both last deployment and this deployment," said Runckel. "They wanted to demonstrate their friendship with the Iraqis and mark this moment in history in their own way."

Sgt. Robert Milam and Pfc. Daniel Pollard, both structural repair specialists who were primarily involved in the aircraft sheet metal repair. Milam and Pollard volunteered to assist with the L-29's restoration by helping hammer out dents in the Delfin and assisting with sanding, stripping and re-painting.

"We all volunteered our time on the project both last deployment and this deployment," said Milam. "I was happy to do it. It feels good to know that we've left our mark in a way that our Iraqi counterparts can appreciate too."

"The Iraqis are our partners, and this plane will be here as long as they want it," said Pollard. "We all took great pride in getting to contribute to the partnership in this way. I really want them to be proud of it and I hope they will be."